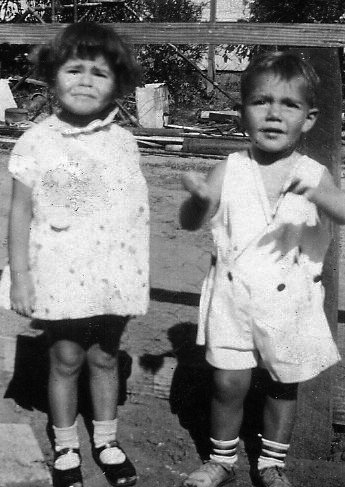 My father on the right as a beautiful boy

As I have been browsing other bloggers posts, I have noticed some lovely memorials to fathers who have passed on. It struck me that although my Dad died in 1990, I have no similar memories. He disappeared from my life when I was about 2 years old and, to all intents and purposes, abandoned us in Glasgow at my Grandmother’s home. Not only that, he ‘borrowed’ money from my mum’s family, never to be repaid.

My mum was a very complicated person with a mental illness and alcohol problem. When I was younger she invariably tried to boost the image of my Dad – told me how handsome, talented, clever and creative he was. I was aware that the rest of her family did not share that opinion. Then, one wonderful day, a giant package arrived from the States. Usually the parcels at Christmas were from my two single maternal aunts and one relative of my father. This one was from my father and it was full of a strange mixture of toys including a pink Cadillac, a fire engine and a large baby doll. I was so excited to receive something from this elusive father. I wasn’t quite old enough to figure out why my mum was conflicted about the parcel – we never did receive any alimony.

As the years passed, a clearer picture of my father emerged. He was a deeply flawed but utterly charismatic man who may well have had mental health issues – certainly he was an alcoholic. In one awful drunken revelation, my mum wailed at me that my Dad had wanted her to get an illegal abortion in 1959. I can still remember how devastating that was to me – not only was I an unwanted burden to my mother but my father probably only married my mother because of my existence. To make things worse I also knew that my father’s cousin, my aunt Jackie, wanted to adopt me because of the circumstances of my birth. How I longed that she had.

Time moved on, I had inherited not just a damaged psyche but a genetic mental illness. I married very young and when I was around 30 found out that we could not have children. That must have triggered something in my head and I asked my mum if she would be upset if I tried to trace my Dad but she was surprisingly keen. Long story short, I found him and he was happy to have reconnected. In essence, I had never met him and was struck by how sexy and alluring his voice was. It resonated beautifully.

There is no happy ending. Eventually, I couldn’t stand to even speak to him after many drunken calls in the middle of the night. He died in desperately sad circumstances, alone, and I am just sad that I don’t have a wonderful Dad to pay tribute to. The one person, who knew him intimately and did not dislike him, told me that I inherited his charisma. I have been told that I have a sexy and alluring voice, too.

PS. After I wrote this I looked at my avatar and my Dad as a child and realized our faces are identical.

35 thoughts on “My Charismatic Father”