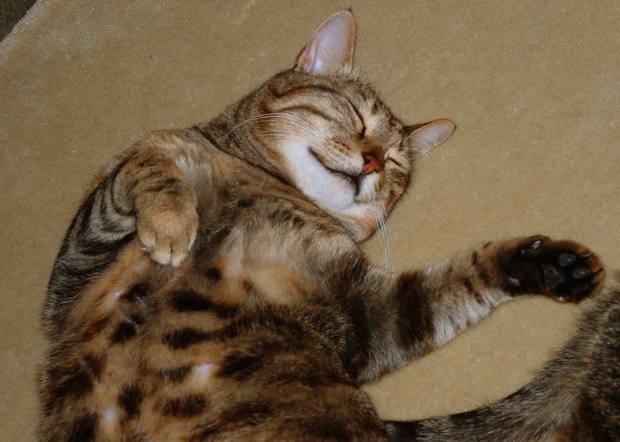 This post is a little lead in or teaser into my theme next week – sexuality. Can you tell that I can’t get frisky until after my cataract operation? Teddy has been chasing me all around the house but he missed his opportunity…

Many years ago we both worked for a small oil service company in the north of Scotland. Sometimes small companies are so much fun to work for and give you endless humorous stories. When we moved to this city, I had to change jobs/careers again and finally got the opportunity to work as a fossil picker. Basically, you look at core samples (from oil wells) under a microscope and pull out micro-fossils for the real genius’s to look at. It’s a perfect job for someone with OCD to do. I was being trained at the same time as a very eager young man. He was bragging about how much he had impressed them at interview and just at that moment my husband walk past the window and waved. In response I said, “I slept with that guy to get the job”. The rest of the laboratory collapsed laughing and the young man was shocked. Well, it was the truth. Nepotism!

That’s not my funny story, though. After we had both moved on to other jobs we kept in touch with the base manager who passed on this tale. They had employed a very pretty young girl, about 18, with ample assets, shall we say? She looked good but wasn’t the sharpest pencil in the box so was employed as a cleaner. The majority of staff in the various units was male and their jaws dropped open when they saw their new cleaner. She was already notorious in this provincial city because her mother had signed a waiver when she was 16 to allow her to model topless in one of our seedier newspapers. You think the ones in the US are bad but the Super, Soaraway, Sun was the worst daily tabloid. Men would just drool over someone’s breasts on the bus or train while giving you the eye.

So, to supplement her job as a cleaner she did evening jobs on the side. On one unforgettable occasion she had put up a handwritten poster on the company noticeboard to advertise her services. There were plenty of potential lads who were organizing grooms nights or stag nights as we call them in the UK.

I told you that she wasn’t the sharpest pencil in the box but I bet she got plenty of work!