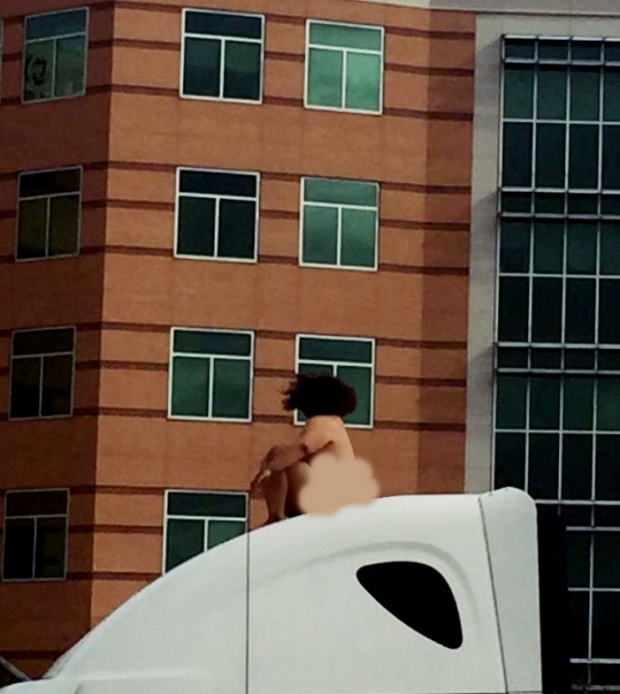 We went to our lawyer downtown to change our wills on Monday. The lawyer’s assistant asked us if we had heard about the naked lady dancing on top of a big rig on the 290 highway. We burst out laughing and said, “What next?” Houston’s freeways are notorious for odd things happening. Accidents happen every day, not always fatal, and weird things fall off trucks all the time. I don’t know how many times I have had to veer to avoid a sofa or a ladder. As Texans we are also kinda nosy and rubber necking at accidents sites is a real problem. You will be in a one hour delay with nose to tail traffic and then you discover that the accident was on the OTHER SIDE OF THE FREEWAY! It is a very hard-working city with tired, underpaid, under-qualified drivers from all over the world. When I greet tourists, I ask them if they have ever driven in Mexico City or Egypt – just to forewarn them.

As I started to think about this naked lady incident, I thought she must have just flipped. Briefly, she had been involved in a pile-up then took off all her clothes and clambered on top of the big rig that had been involved in the accident. She danced and twerked according to reports and this a link to a thoughtfully written article by our local paper The Houston Chronicle Naked Lady story

After my last post, it made me so sad that yet again this whole debacle was caused by a psychiatric problem and thank goodness the first responders were empathic to her issue. Can you imagine if she had thrown herself off the truck or ran into 5 lanes of traffic? Life is so frenetic here that she may not have realized that her mental health was breaking – who knows but at least she is in a hospital now. On a funnier note – can you imagine what the truck driver was thinking as a naked lady clambered on top of his rig?

I mentioned to our lawyer that I had a bad car accident a few years back when I was rear-ended by a truck carrying a heavy load. She asked why I didn’t approach her and now I wish I had. As someone with a mental illness, I was entirely traumatized by the incident, the ambulance, the predatory surgeon, the endless bills and bureaucracy. I did approach one reputable lawyer who was very keen to take on my case, particularly because both my physical health (spine) and mental health were impacted. Finally, I realized that I would only recover mentally if I moved on and settled for a paltry sum that didn’t even cover medical costs. I also didn’t want to ruin the life of the contractor who accidentally ran into me.

I have had more accidents since – it is such a common occurrence here. Often I wonder why there aren’t more fatal accidents? On one occasion a Latin American man stopped to give me his card as a witness and I now will always do that if it is safe for me to stop. Pay it forward.

42 thoughts on “Naked lady on top of big rig”