I married in 1982, one year after Princess Diana.  Many of the dresses of that period look dated but my lucky bargain dress stayed stylish and beautiful.  This photo (set) was a gift to Teddy on our 30th wedding anniversary – 6 years ago.  My wedding dress had not been cleaned in all those years and had traveled across continents.  It was in a plastic bag in our attic in Texas and after I lost weight, I decided to try it on.  It looked amazing so I took it my local dry cleaner who made it like new for less than $10.  It is ivory satin with tulle and Belgian cotton lace on the bottom.  I was struggling to find a wedding dress in Scotland because my skin is really more sallow than it looks.  All the bright white dresses washed me out.  Finally, my mum and I went to Fraser’s department store in Glasgow and found this dusty ballgown (not a wedding dress) reduced from 100 to 15 GBP.  Even then that was a steal.

As soon as the photographs were taken, I took the dress to my local thrift store so that some other lucky bride could enjoy it.  I felt somewhat guilty for having ignored it for the previous 30 years… Below is the dress on the original day, 19 July 1982. 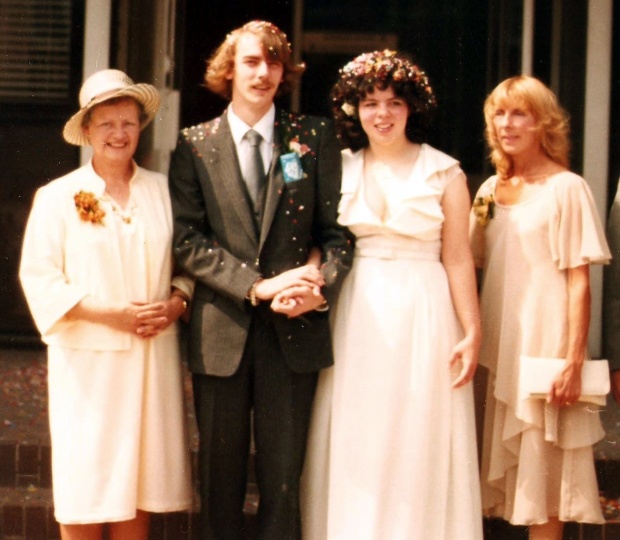 Teddy and Bunny, with our Mums at our side in 1982

So this is the original color of my hair and also Teddy’s glorious blonde hair.  My hair is naturally curly and covered in confetti.  My mum had sewn up the low cut neckline for modesty but the stitches burst open as soon as I stepped (elegantly) out of the taxi.  At least Teddy and his grand-dad looked really happy at the view!  I was 21 but looked like a teenager – nervous about marrying a virtual stranger and living in a new country. 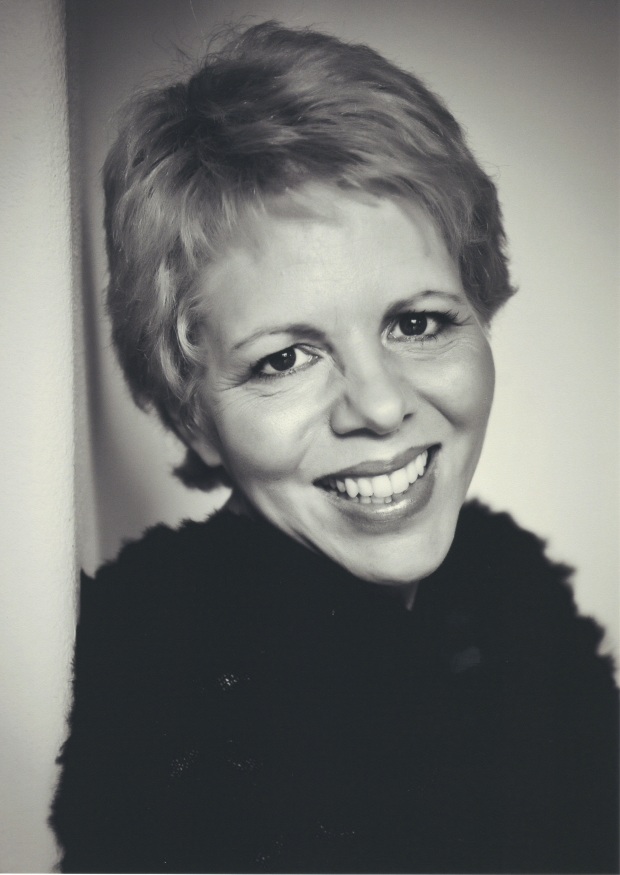 The anniversary photographer had a make-up artist so I posed for a variety of shots.  Teddy proudly displays them in his office and delights in visitors saying “Is that your wife??”  Yes, she is. ❤

Teddy and I took an olde worlde selfie last week with the timer on a camera. My girlfriends in Scotland had met up last weekend and had sent photos of them enjoying themselves. There were a few ‘refreshments’ imbibed… With my recent ill health I had been reluctant to take selfies. My body dysmorphia has been worse of late and when I look in the mirror I see the older version of Charlize Theron in the movie Snow White and the Huntsman.

Teddy is also unable to see what an attractive man he is – who does not look like he has just turned 59 years old (I will be 57 in a few months). We met when I was 21 and I was astonished that he had not dated half of Glasgow. Even his aunt thought he was gay! Had I not predated him, I doubt we would be married for 35 years. I thought he was cool and uninterested but he thought he had met the girl of his dreams. We were engaged within 3 months and married after 11 months leading to family theories of pregnancy. I have still to whelp…🐕🐶🐕

He is definitely looking younger of late however and I have a theory about that. From our mid 50s we have been having a wonderful time, both relaxed at work and travelling the world together. Then the oil slump came and life changed dramatically. We both have new jobs that can be stressful with horrible commutes. We are working in more challenging environments using different skillsets, with new colleagues. As difficult as that has been, the silver lining is that we both look a little younger than our real ages. We try to make life at home as stress free as possible and rarely socialize with other people. Time is too precious to spend with anyone else but each other.

The icing on the cake is that Teddy won an award at the Offshore Technology Conference (Oil) for his part in writing a paper whilst working at the company that laid him off. Isn’t life ironic? More fool them. I get stressed when I am working events but funny moments make it all worthwhile. When waiting for some guests the other day, I was sitting with a lovely young colleague chatting. A Ukrainian limo driver was really staring at me and eventually he said, “I know you”. I responded that he probably knew me from the airport. No, he insisted that I looked really like someone from the old country. He moved the other side but kept staring at ‘those eyes’. I burst out laughing and said, “Would you like a photograph?” Later that day a Lebanese silver fox told me that he and his wife were like sister and brother. Uh oh – time to stop flirting!!

The night the photograph was taken we went out for an ‘early bird supper’ and I was concerned that last year’s dress from Ross was too short. You can see how it rides up in the photograph. We popped into Walgreens on the way back and both of the beauty assistants told me how lovely I looked. It was the perfect end to a lovely evening out with my honey.