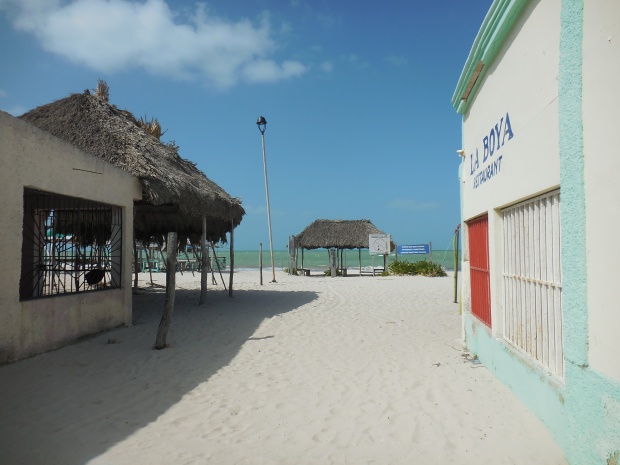 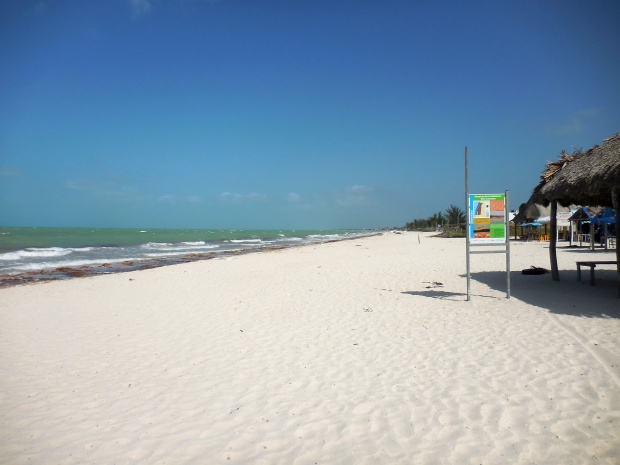 Doesn’t this look like paradise?  Where are the people? Celestún is famous for the breeding grounds of flamingos and the area is a bio preserve.  This means that Celestún hasn’t developed as much as other places in Yucatan such as Cancun.  It was warm but very breezy as you can see from the waves. 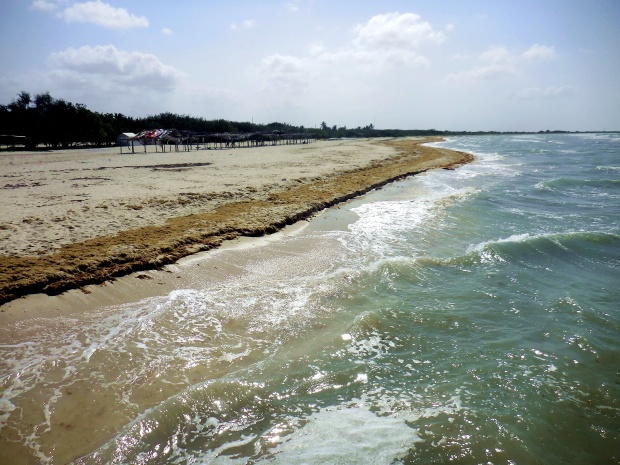 After I walked along the beach, I investigated some of the streets close by.  First I saw a group of elderly ladies in various stages of ill health that had been to the local clinic.  I doubt their medical care was as extensive as mine but they were happily chattering as they walked home.  They had probably known each other from childhood and I looked at them in quiet envy. 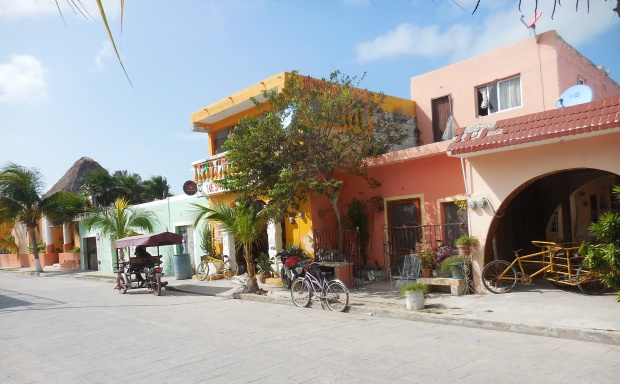 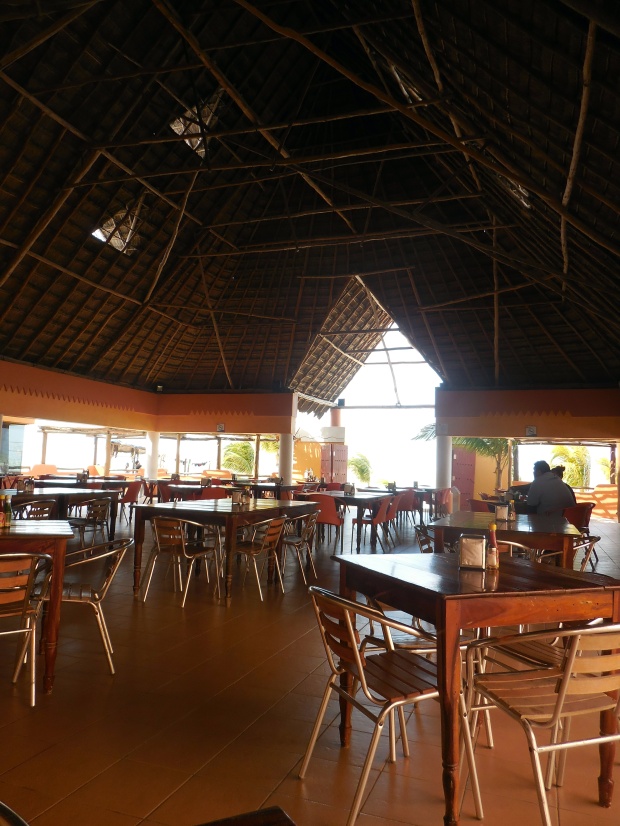 There were a few restaurants and one was right on the beach.  I really needed a clean restroom but ordered a local beer and admired the view.  The restrooms were like most in the area – spotlessly clean, smelling of bleach with that fantastic foot pedal to flush the toilet.  There was also a clean wastebasket to put your toilet paper in.  The pipes are too narrow and the paper pollutes the pristine environment.  I thanked my hosts kindly and walked out. 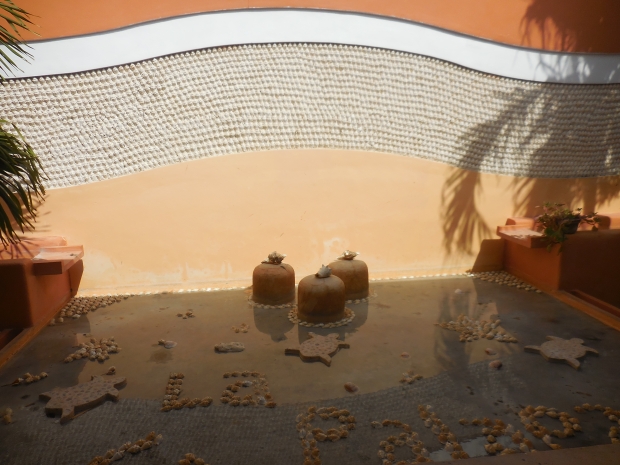 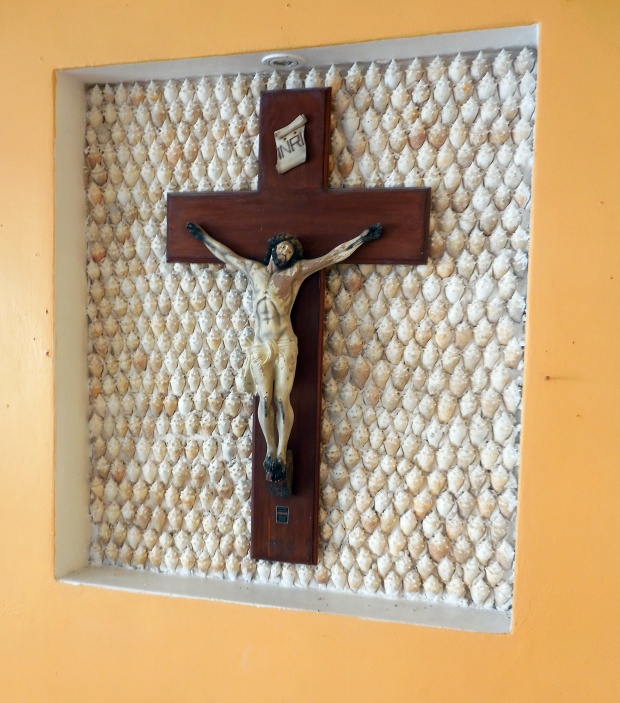 Only in Mexico do you get a crucifix in the bar…

As I rounded the corner, reality struck me in the face.  An old sick dog was seizing in the road.  Her eyes were sunken and she was just hours or days from death.  I immediately went into triage mode.  How could I euthanize this dog, likely a stray?  I had left my tranquillizers at the hotel which I could have crushed into some tuna.  As I stopped and stared, I knew I could do nothing.  My rabies vaccinations are long since out of date.  The dog was not mine and it might not be culturally acceptable for me to be the angel of death.  In Cairo most people disapproved of animal euthanasia as it was God’s decision when we die.

I walked on with the knowledge that as much as I would like to, I couldn’t live in a poor rural country.  In Belize I snuck food out of the hotel to feed the starving dogs because there were no shops.  When I got back to the car, Angel, my driver, asked me what I thought of the village.  I told him truthfully that it was exquisite and charming.  Then I told him about the dog in halting Spanish – to my astonishment he seemed to truly understand my dilemma.  Ah, the yin and yang of life. 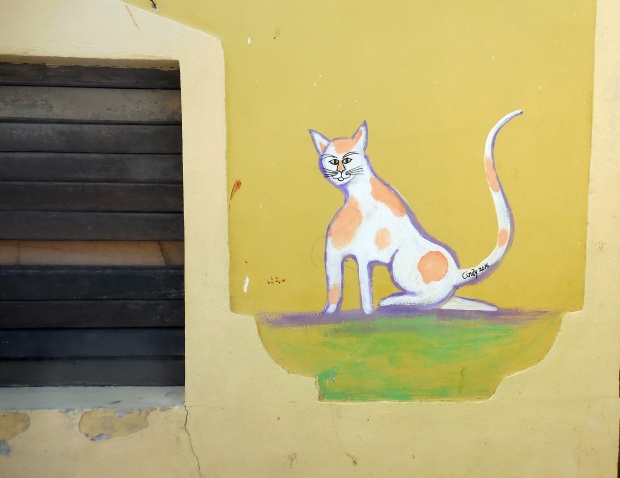 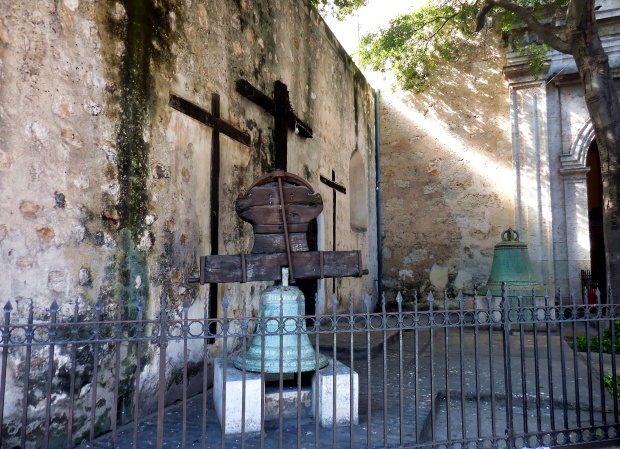 My good friend Victo Dolore recently posted one of her wonderful short pieces of fiction Post Pains. She asked if any of her readers felt something from a building. Since I am a certifiable ball of emotions and feelings, it happens to me all the time and despite the candy colored buildings of my last post Colorful Merida, the graveyard (pictured above) made the hair on the back of my neck rise. There is something about the bells and the three crucifixes that seems so sinister. It was naturally shaded so that heightened the effect. Maybe it was because Merida Cathedral was once a Maya temple?

The interior of the Cathedral was somberly beautiful but there was no color which is unusual in churches here or in Mexico.  Even the nuns were wearing off white habits.  Is it the gray of the limestone that bothers me?

Limestone church and a local with her slippers on? Que?

Perhaps it is those little slits for windows (perfect in a heatwave) that upsets me? 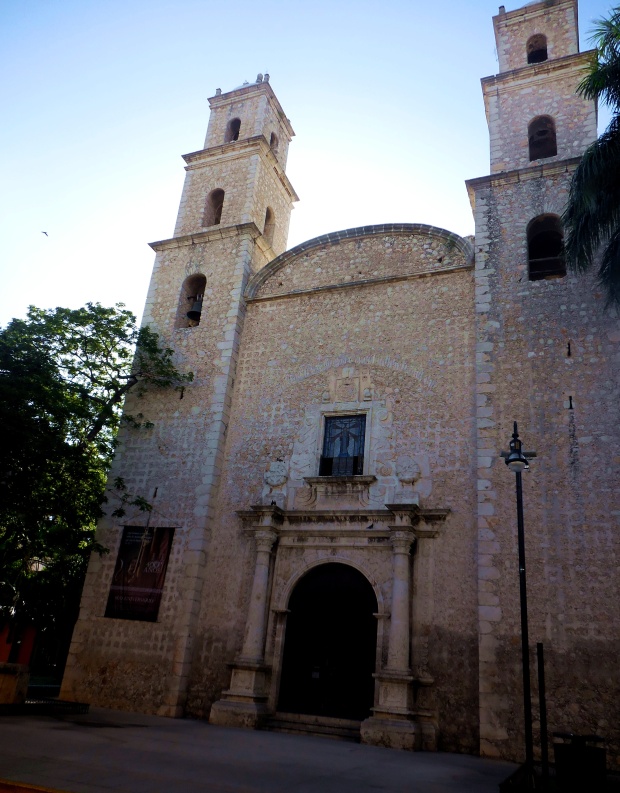 Finally, why do I take most of my photographs from a weird angle?  I have to straighten most of them but it truly reflects what this photographer sees.  My thinking is skewed because of a mental illness, as is my take on life.  It is not always negative, however, and like most people I like to be scared (a little).  Boo!