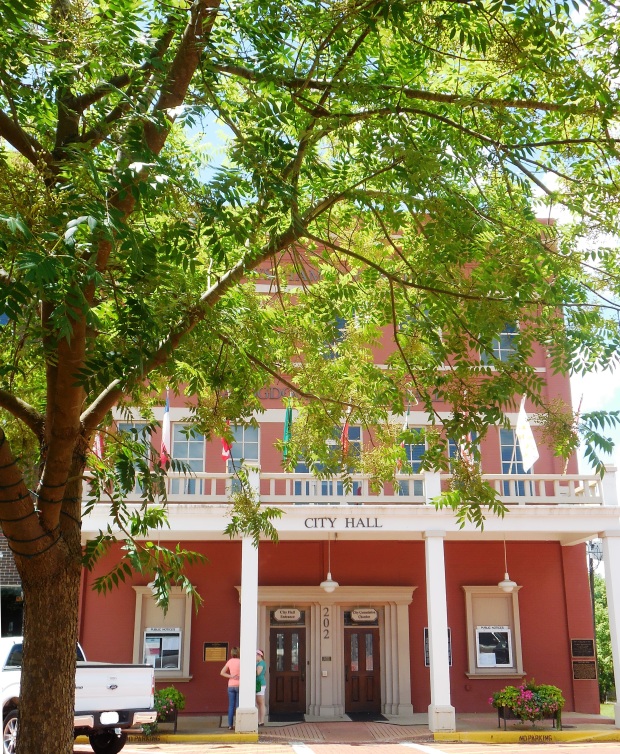 Nacogdoches is the oldest town in Texas and it is unique both because of its antiquity and the 9 flags that have flown over it. They included Spain, France, Mexico and Louisiana amongst others and this is a link to a comprehensive list http://www.pictures-of-historic-nacogdoches.com/023nineflags.html We decided that this would be a great location to celebrate our 33rd wedding anniversary. I know, I know, surely I was a child bride.. The town was utterly fascinating and this beautiful pink building was Sam Houston’s house – now the city hall sitting on the beautiful town square. Everywhere you walked there was yet another historical wall marking – it is remarkable that so many of the old buildings have been maintained and restored. It is situated in the North East of Texas, close to the Louisiana border and in the heart of the Piney Woods. The weather was astonishingly hot but not as humid as the south. I learned something amazing in the Tourist Center. Tejas is not the Spanish name for Texas but the Caddo (local native Americans) word for friend. They were one of the many peaceful tribes that were settled in Texas who greeted the invading Spanish conquistadores with friendship. It makes me so sad to think that their territory was stolen, many were killed by the spread of European diseases and moved around like cattle. I am so lucky, like many Americans, to have a little native blood to carry through the generations, bonding us all together. Nacogdoches is a college town – Stephen F Austin University. We visited the university’s Piney Woods Native Plant Center which was a small arboretum with native plants. We walked along the little stream enchanted by the Ebony Jewel Wing Damselflies who fluttered around us like little fairies with black velvet cloaks. The Ladies had bronze waistcoats and the Lords had emerald green waistcoats. Magical. Click on the link to see photos of these fairies and find out all about the oldest town in Texas.  POSTCARD FROM NACOGDOCHES