I received an email from one of the genealogical sites that I subscribe to, revealing that my paternal grandfather, Raymond Dellinger has been drafted for WWI.  This is his draft paper. 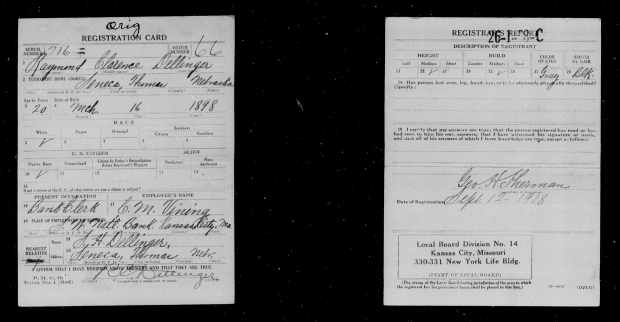 I am not 100% sure but I don’t think that he was actually sent to war.  Lucky for him as so many veterans of WWI died of battle wounds and disease.  I was intrigued that he was a bank clerk in Nebraska.  His older sister had married a doctor from Nebraska but the family had previously lived in Oklahoma, Texas and New Mexico.  My grandfather was born on the Chickasaw nation in OK.

I never had the opportunity to meet this Grandpa and he died when I was a child.  He was so handsome with gray eyes that I would have loved to have seen him in person.  Now I know where the recessive gene for my blue gray eyes comes from.  My father had brown eyes and my mum had blue. 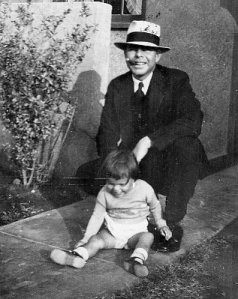 As I am looking at the WWI drafts I see that 20 more relatives had been drafted into the war.  I do not know how many actually fought but my great uncle Earl (grandpa’s brother) was a Marine and fought in the Battle of Managua, 1927.  Then an incorrectly spelled name caught my attention, a distant cousin named Tony Ortiga (Ortega).  His draft fell into a strange category of Indians, Insane and Prisoners.  Well, in my family it could be all three….but what awful world categorizes those groups together? It was Folsom Prison in Tony’s case.  I wonder what he did?  Be careful when you open the genealogical closet because you never know what skeleton will fall out.

As I was reading this sad draft, I could hear Johnny Cash playing at Folsom prison.

‘When I hear that whistle blowing, I hang my head and cry’

Somehow that is the perfect segue from my last post on trains to this one on Memorial Day.

Lest we forget. Rest in Peace.