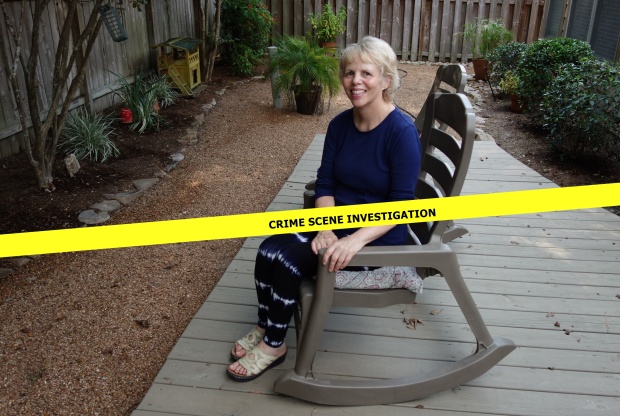 It looks like such a peaceful scene, doesn’t it? Teddy and I have used our deck more often, since the pandemic, than we have in 16 years.  The trees in the reserve have grown so much that we get nice shade cover in the afternoon.  A couple of weeks ago, I noticed a ‘farmyard’ smell but we live many miles from farms in our forested idyll.  At first I wondered if someone had put down some stinky mulch or fertilizer but it is entirely the wrong time of year and it has been 100 degrees out there.

We had a few breezy days and Teddy agreed with me that he could smell a faint odor on the air but perhaps it was the communal garbage bins at the apartments beyond the reserve?  After another couple of days, I asked him if I should do a ‘Karen’ and complain to the apartment manager.  Teddy, very wisely, suggested that we just leave it since it was almost 100 degrees and maybe the bins needed emptied.  (We have never smelled their garbage bins in the last 16 years).

The next day, I started looking under the deck but could see nothing but dead leaves but there was still this strange odor that now Teddy (probably post Covid-19) could not smell at all.  Then he started saying things like, “You know what you are like when you get obsessed about stuff…”  To be fair, I agreed with him but we had paid hundreds of dollars two years ago to remove a huge dead skunk which had been ripped to pieces by another predator from under the same bloody deck.  This new odor was delicate by comparison.

One evening we put out the night camera to see if there was an obvious culprit with a smelly nest?  They were just the usual subjects – squirrels, possums, wood rats and two gorgeously marked little skunks (alive and well).  On a forensic note, we had spotted some very pretty little iridescent flies around the deck, glowing purple and green.  We never have flies in our yard…only endless mosquitoes that have tested positive for West Nile Disease in our forest this year.  At this stage, I should note that I am an aficionado of every Forensic program, real and fiction.  Decomp and adipose are terms that I am very familiar with.

With that thought in my head, I finally snapped and said to Teddy, “We need to call pest control out”.  He looked at me as though I hadn’t been taking my medication.  We compromised on him unscrewing some of the deck planks so that I could root around like Bones.  The drill had no battery power as it hadn’t been used for a while.  In desperation, I put a blanket on the ground and got my rake under the deck and started pulling stuff out.  When a cloud of these pretty iridescent flies flew out at me, I knew I had found the evidence.  Finally I brought out a little gray furry thing and even more of the dratted flies.  I stood up and ran off squealing but then put my big girl pants on and returned with gloves, bags and disinfectant.

It was a poor little squirrel, who had left this mortal coil and decided our deck would be a lovely resting place.  I shouted to Teddy that I had found the victim but he chose to carry on working since he didn’t want to confront his wife who said, “SEE, SEE, I told you it was a critter!”  The decomposition flies were now yukky, not pretty, and I had to shake the corpse to get the damned things off.  Another friend had just told me this lovely story of rescuing a dying baby bird from their pool, putting it in a leaf lined box and then burying it in their garden with a cairn for remembrance.  Our squirrel went in the wheelie bin.

After all that, in almost 100 degree weather, I went all OCD (that’s a clinical term).  Hose, disinfectant, bleach and then I did the same for me.  All my clothes went in the washer immediately.  It struck me as ironic that there is a virus out there that is so much more dangerous than any dead squirrel.  The garden is serene again, smelling verdant and I am so glad I didn’t speak to the apartment manager…