On the water somewhere?

Can you guess? Apologies for my absence from writing and reading blogs. My life has been a little hectic recently and I took advantage of a short hiatus in my schedule to fly to San Diego. What a photogenic city! I chose this destination because some of my American ancestors were early settlers in San Diego…and it had a great weather forecast. I am so shallow.

Over the next few weeks I will share my travels but for a change, I had very little funny human encounters. I think I was disadvantaged by staying the Gaslamp area which was full of convention visitors and tourists. The Uber drivers were eagerly engaging but other people didn’t seem to want to talk to me. 😢 I’m Chatty Kerry, for goodness sakes! Nobody was unfriendly but just focused on themselves. When I walk around the trails near my house most people wave or say hello whether I know them or not.

The Gaslamp is an interesting part of downtown San Diego which is on the way up but some parts are still a little run down. My hotel had a guide for safety at night and there was a safe in my crappy room. Istanbul seemed safer… I dutifully took sensible precautions and went to dinner at Happy Hour, taking advantage of sunset and safer streets. When I walked into the lobby of the Hotel Andaz, I thought I had interrupted a photo shoot for a glamorous magazine. There were a plethora of handsome young men in snappy suits. When they ascended to the rooftop bar, I asked why they were being photographed. It was a groomsman party from England would you believe? They must have had megabucks to party across the pond! More lovely shots of them in blogs to come. 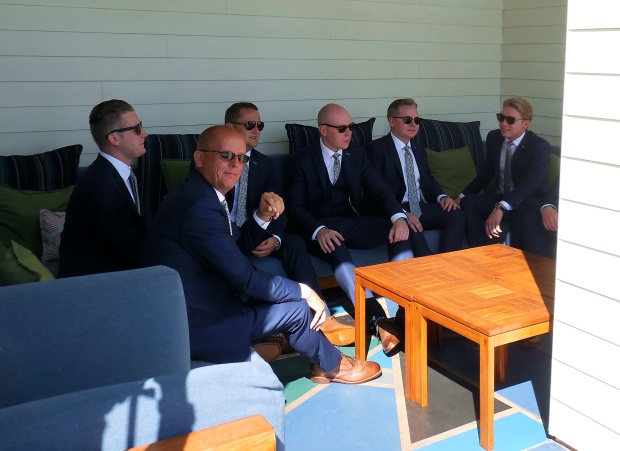 I love rooftop bars because of the photo opportunities and this one was lovely but full of lonely people sitting by themselves (and me…) It crossed my mind that this would have been a good Bunny and Teddy destination but we are travelling alone until our last cat makes it to the rainbow bridge. On the the second night I ventured further afield and for the the first time ever, rejected a meal at a swanky bar. It was terrible so I found yet another rooftop bar (not the hip Hotel Andaz in the shots) which was much better but the food was still meh…

The barmaid in the second unnamed rooftop hotel, however, was wearing an outfit that shocked even me. She was an attractive slim blonde who was wearing a non supportive bralette with see- through linen pants that revealed that she had forgotten to put on her underwear that day. Perhaps it was a way to increase her tips? Ladies at bars were wearing very revealing costumes so maybe it is a really fun city after dark. Guys were giving me lascivious looks or none at all and I was wearing very supportive underwear. I don’t mind a nice compliment or admiring eye but I felt uncomfortable on my own.  Many beautiful shots to come and some funny stories.