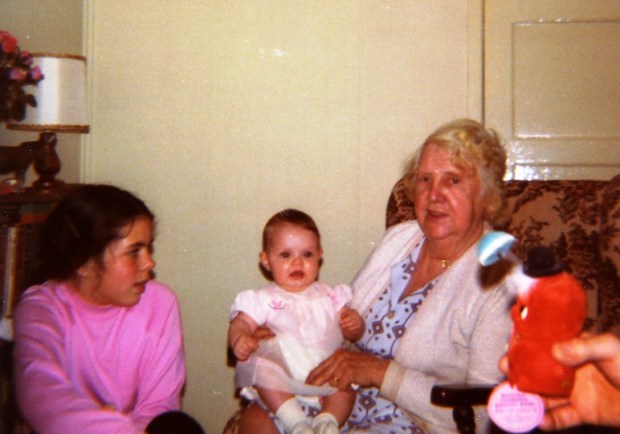 Nana with Kerry and a new cousin

I adored Nana, my maternal grandmother. After my parent’s marriage dissipated, my mother and I stayed in Nana’s apartment, then house, in Glasgow. In another blog ‘the day I knew I could write’, I mentioned that I had written a disturbing tale of a grandmother dying in a rocking chair when I was about 7 years old. Nana had a stroke then and I was just working through my anxiety about the prospect of her death. She was a strong, stabilizing influence on me when my mother was heading towards a severe mental breakdown when I was around 10 years old. My mother had many rounds of electric shock treatment and emerged a broken dove from psychiatric hospital. From then she went onto disability for the rest of her life.

A few months before my Nana’s death when I was 13 years old and she was 79, she was unwell and lying in bed during the daytime. I went into the garden and picked a small bouquet of red and white flowers and put them in a vase. As I entered her bedroom, she screamed to my mum, Kathleen, to take the flowers away. I didn’t realize that my very superstitious Irish grandmother thought that red and white flowers were a warning of death. To this day, I will not receive or give a red and white bouquet. This superstition is very old and reflects red blood and white bandages just like a Barber’s pole. In the past, Barbers often acted as part-time medics and their red and white pole indicated that you go there for medical help much like the green sign for pharmacies.

I am very intuitive and occasionally psychic. Back then I didn’t realize that I can smell and/or sense cancer. Unknown to me, and probably the rest of the family, Nana was dying of lung cancer. As a mature 13 year old, I started removing myself emotionally from my Nana. I still behaved the same but I was holding back some of my very strong affection and love just to protect myself. My life, as I predicted, was going to fall apart after my Nana’s death and quite spectacularly. I am certain that she sensed my withdrawal but I felt that she also withdrew from me – perhaps because I was unable to hide my pity or the truth in my child’s eyes. Everyone else, my mother and all her siblings seemed in denial about how soon she would die.

Just before she died, she asked for me to sit with her and I think we settled our uneasiness. I could not understand why she was so afraid of death, as a life-long Roman Catholic, and she was frightened of my pragmatic acceptance. Her children were terribly upset, naturally, when her death came. In those days the open coffin was kept in her bedroom so that friends and family could pray over the body. It settled me to see her dead body and kiss her goodbye as it was no longer her. My aunt was upset that the mortician had put too much make-up on her but when you are dead, you’re dead. I cried before she died and never did so again. At the funeral I was the only one who was tearless yet I had the most to lose from her death.

For years and up until this day, I have dreams that she has been alive all this time and I had forgotten about her. I feel great guilt and remorse in the dreams but I think I enjoy seeing her come to life just one more time. For some unknown reason I have always accepted death as part of the great circle of life and am not afraid – sometimes I long for it. 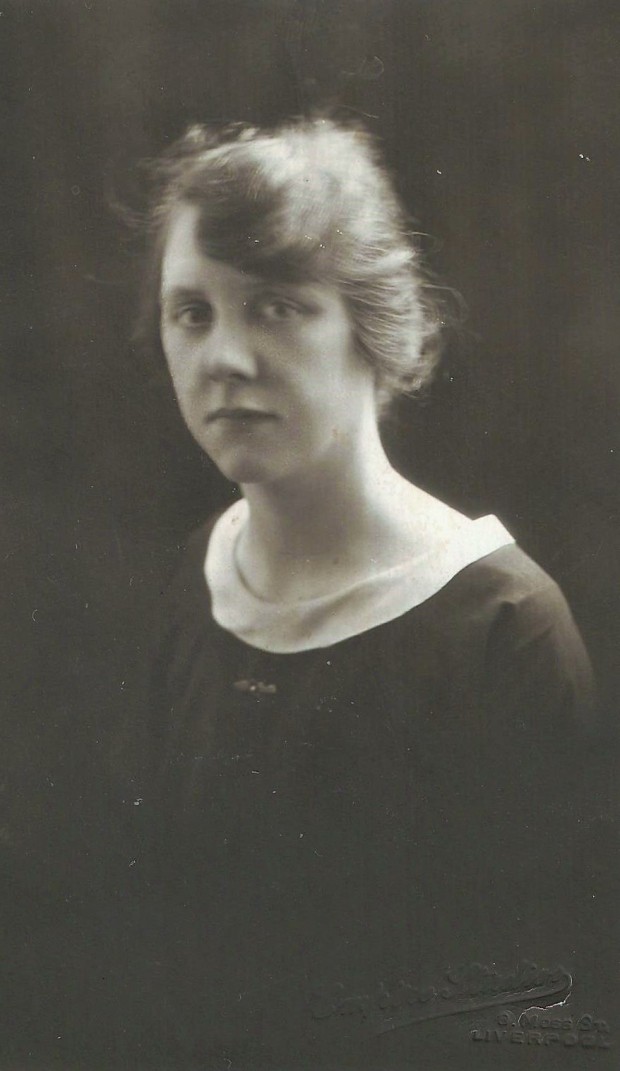 This is a photograph of my maternal grandmother aka Nana. One of my earliest connections on WordPress was with a fantastic photographer, Ed Mooney, from the old country (Kildare, Ireland). I was astonished that he liked anything on my blog when his was a work of art, particularly the black and white photographs. Recently, I noticed that he had his first guest blogger and asked him if we would consider a blog from me. To my delight he said yes and uploaded it this morning. I am overwhelmed by the response and am truly grateful to Ed for this opportunity. Below is an excerpt from Our Irish Family Secret and a link to Ed’s marvelous website.
I was Nana’s own personal Inquisitor and it must have driven her crazy. She gave limited details of her past not just to me but to her children. We knew that she had been brought up in a middle-class home in Bootle, just south of Liverpool. Both her parents died young and she took over the care of the youngest children until they married. She joined a convent as a novice nun, she was both religious and beyond marriageable age, but before she could commit to God she met and married my very handsome grandfather, Daniel McHugh. To an imaginative child this was my version of the Sound of Music. He had worked as a policeman in Liverpool but once married they both went back to farm some family land in County Sligo, near Mullaghmore. Sligo is in the north west of Ireland underneath Donegal. In quick succession, they had five children and then my grandfather was diagnosed with lung cancer.
I hope this tantalizes you enough to find out what the secret is and enjoy Ed’s blog. Click here to read the whole story https://edmooneyphoto.wordpress.com/2015/06/22/guest-blog-our-irish-family-secret-by-kerry-duncan/