“Hush, Mam!” gulped Tessa. “Finn is not a changeling.”  Long held in tears welled over and Tessa sank into the fireside chair.  With concern, Tessa’s mother, turned her attention to her beloved daughter.  Her skin had a ghostly pallor and she was exhausted from the long journey from Inverselkie to her home village of Auchnagatt. “Let’s get you to bed,” said Mam “and I will look after the wee cratur.” Silently, Mam thought that she wasn’t ready to call the baby Finn or even accept him.

Tessa’s mother took her out of the damp clothes and gently helped her into the spare bed with a warming pan in it.  Tessa sighed with pleasure at the warm bed with the well-remembered eiderdown quilts.  The sheets were soft from many years washing and smelled of fresh northern air.  Within minutes she had fallen into a deep sleep.  Finn had begun fussing on the table and Mam could tell he was about to let out a wail of distress.  She rushed to comfort him so as not to wake Tessa.

“Let me give you a bosie,” and snuggled Finn into her ample bosom.  As she inhaled the precious smell of the beautiful baby, her heart began to grow tender.  Finn raised his big brown eyes to look at this new person and grasped onto her breast with fat little fingers. “Look at those eyes, ma wee bairnie!” she softly gasped, falling under his spell.  Finn gently smiled, at peace after such a stressful time.  Just then, the latch on the door turned and Tessa’s father walked in, covered in freshly fallen snow.

He cast an eye to his daughter asleep in the bed and then looked quizzically at his wife holding a strange baby. “Sit down Dad, and I will tell you everything,” entreated Mam.  Meanwhile she emptied her sewing box and filled it with her softest blankets.  Mam gently placed Finn in the box who settled down like a cat.  Over supper, Mam filled in the gaps with Dad.  His eyes widened when she told him that Finn was left in a basket outside Tessa and Thom’s door. “I think he might be a changeling,” whispered Mam.

“Ach, Mam!” exclaimed Dad with exasperation, “That’s nonsense.”  Dad persuaded Mam that it was much more likely that some unmarried woman left him at the door.  Perhaps flaxen haired Finn did have ancestor from the Viking lands? “Thom and Tessa came up with a plausible tale and we should support them,” said Dad with a note of finality.  Mam knew better to argue with Dad who was a village elder. “How is Tessa?” he asked.  Mam confided that she looked terrible and that as soon as she recovered from the arduous carriage journey, they should take her to cousin Elspeth who was a healer in the next valley.  As soon as they had received the note from Thom about Tessa contracting the White Plague again, they had sent a messenger to Elspeth to make ready.

The next morning, Tessa woke up with a start.  It took her a moment to figure out where she was.  She looked through the door and saw her father polishing up her old crib for Finn.  It had been sitting in the barn for so many years – Tessa’s eyes filled with happy tears.  Rather unsteadily, she walked into the living room and fell into her father’s welcoming open arms.  Tessa heard a gurgling and turned around to see her mother feeding a bottle of warm goats’ milk to Finn.  He was holding onto Mam’s curly hair and gazing up at her as though she was an Earth Mother.  A fleeting jab of jealousy touched Tessa but she smiled openly at the love between them.

“Granny’s wee bairnie is so hungry,” laughed Mam, spellbound by an unexpected grandchild.  Over the next few days, Tessa’s parents fed her and Finn so much food that they were visibly putting on much needed weight.  Mam was a plain but excellent cook.  Dad was a hunter so their house was filled with plenty.  Tessa eagerly ate the food of her childhood.  Jugged hare, fresh strawberry jam, porridge made with thick cream.  Finn, too, was eagerly eating everything he could lay his fat little hands on.  His new Granny’s knitting fingers flew and in no time, he had a winter layette.  Knitted breeches in all the colors of the countryside – moss green, yellow gorse and rowan red.  Tessa’s needlework skills were matched by her Mam’s knitting expertise.

Tessa had perked up with the comforts of home but she was still coughing up blood into her handkerchief.  Mam and Dad starting packing the horse and wagon and all too soon, they were ready to leave for Cousin Elspeth’s house.  Dad would accompany Tessa but Mam would stay at home with baby Finn.  As Tessa stood at the door, ready to leave, she hugged Finn a little too tightly.  He cried at the ferocity of the hug and the tension in his mother’s body.

“Come awa to Granny,” beseeched Mam, reaching out for Finn.  Somewhat reluctantly, Tessa gently handed him over, knowing that she wouldn’t see him for some months.  The White Plague treatment required months of convalescence.  Finn was oblivious to her as he happily grasped onto his Granny’s bosom.  Dad helped her into the wagon and Mam waved Finn’s little hand to say farewell to his mother.  Tessa blew kisses to him until she couldn’t see them anymore.  Her heart ached with love for Finn but she knew that he could not be in better hands.  Dad gently patted her shoulder in comfort and the next stage of Tessa’s journey began.

My husband’s adoptive granny was ambivalent about his arrival because, after they took him home and he was unswaddled, they noticed he had an opening at the bottom of his spine – most commonly seen in spina bifida patients.  They immediately took him to the doctor who diagnosed a small abnormality of the coccyx and said it would heal if he was left unswaddled.  It completely healed but he had to have some padding on his tailbone during certain sports. Granny had beautiful brown eyes and felt a kinship to her only brown eyed grandson.  Their love was enhanced by Granny looking after him while his Mum was in the TB ward.

There is a real village of Auchnagatt in north east Scotland. We lived there in an old house in the late 1980s. The name of the village is derived from Gaelic meaning Field of the Cat/Witch. We had our first three cats – one was definitely a witch… 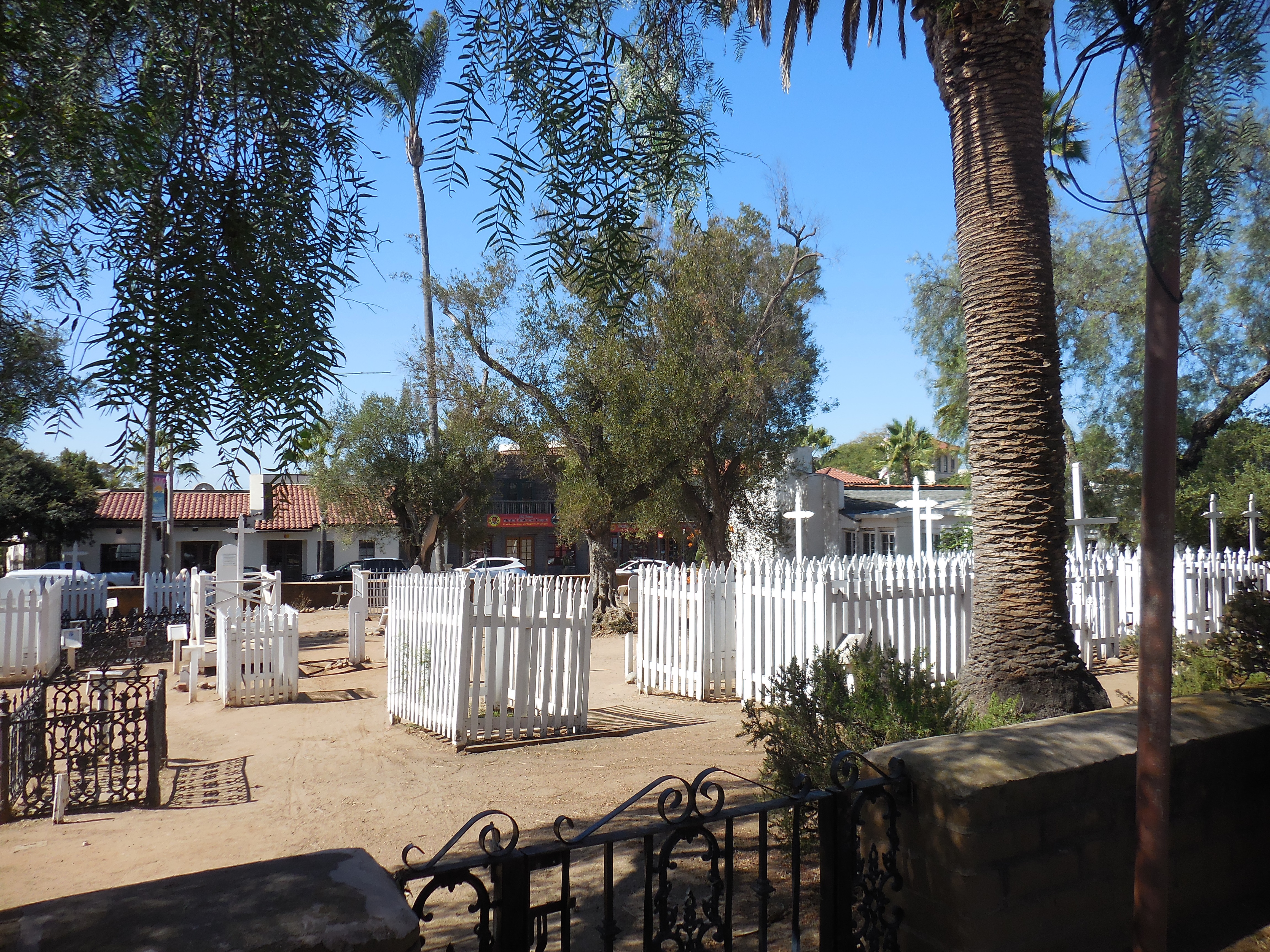 My nomadic ancestors have graves all over the world but I recently found out that some of them settled in San Diego as early pioneers.  This provoked my recent visit to San Diego.  Leaving the airport, I had a very personable Uber driver who took me to my hotel in the Gaslamp area, to drop my bag, and then straight to the oldest cemetery in San Diego, El Campo.  It is situated in what was once the old town and now has a replica pioneer town.  At first I was surprised at how small and basic the cemetery was but there was something haunting about the simple stone markers and recent wooden stakes.  Much of the cemetery was taken over when a new railroad was built and many of the residents were re interred in a different part of the city. 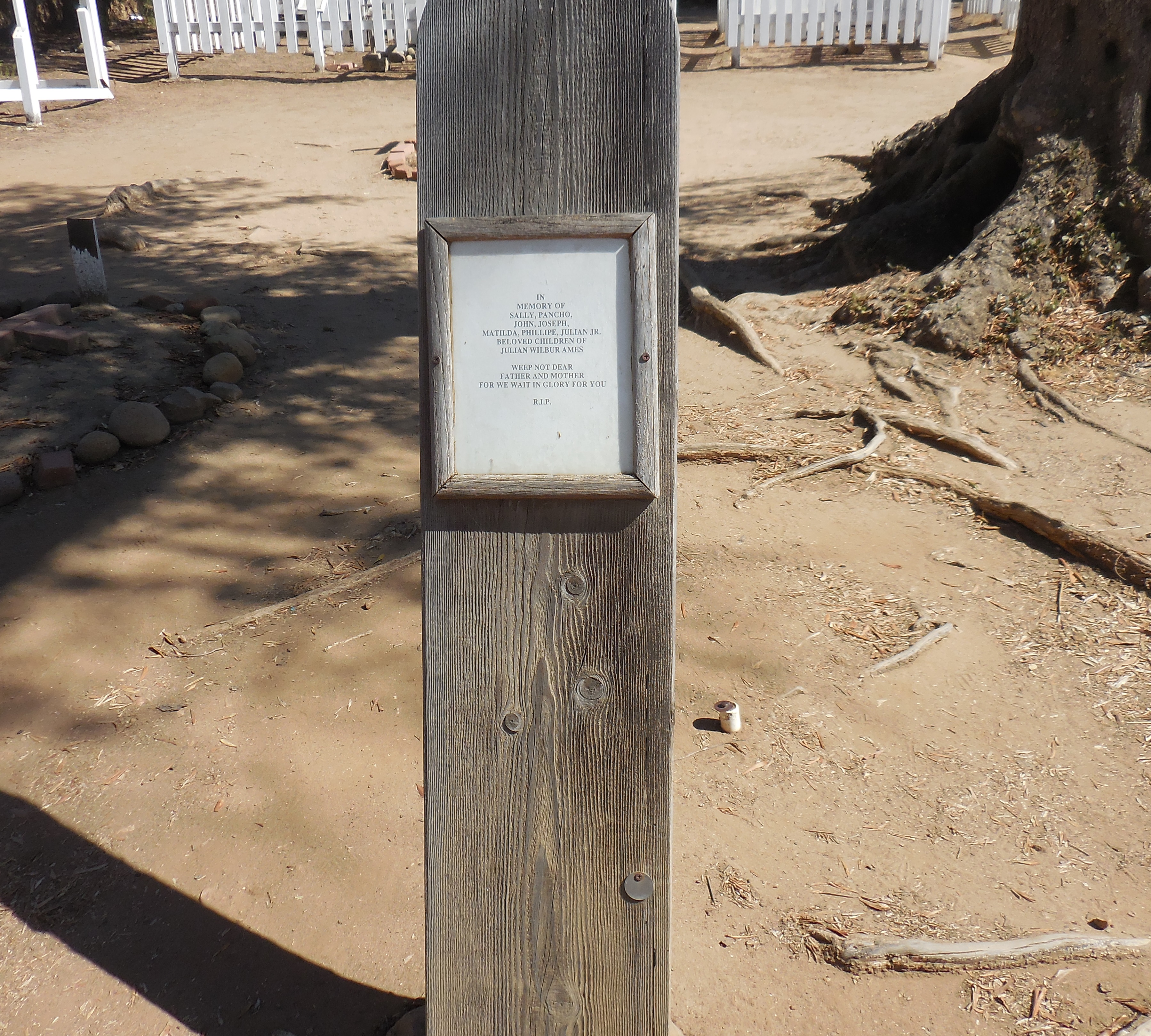 This plaque is in remembrance of my great-great-great grandfather Jesse or Julian Ames, a pioneer from Connecticut.  His daughter Matilda is my direct link to this very large family.  The Ames family has a very large family get-together every year – perhaps I will ask for an invitation?  He was born in 1807 and died in 1866. 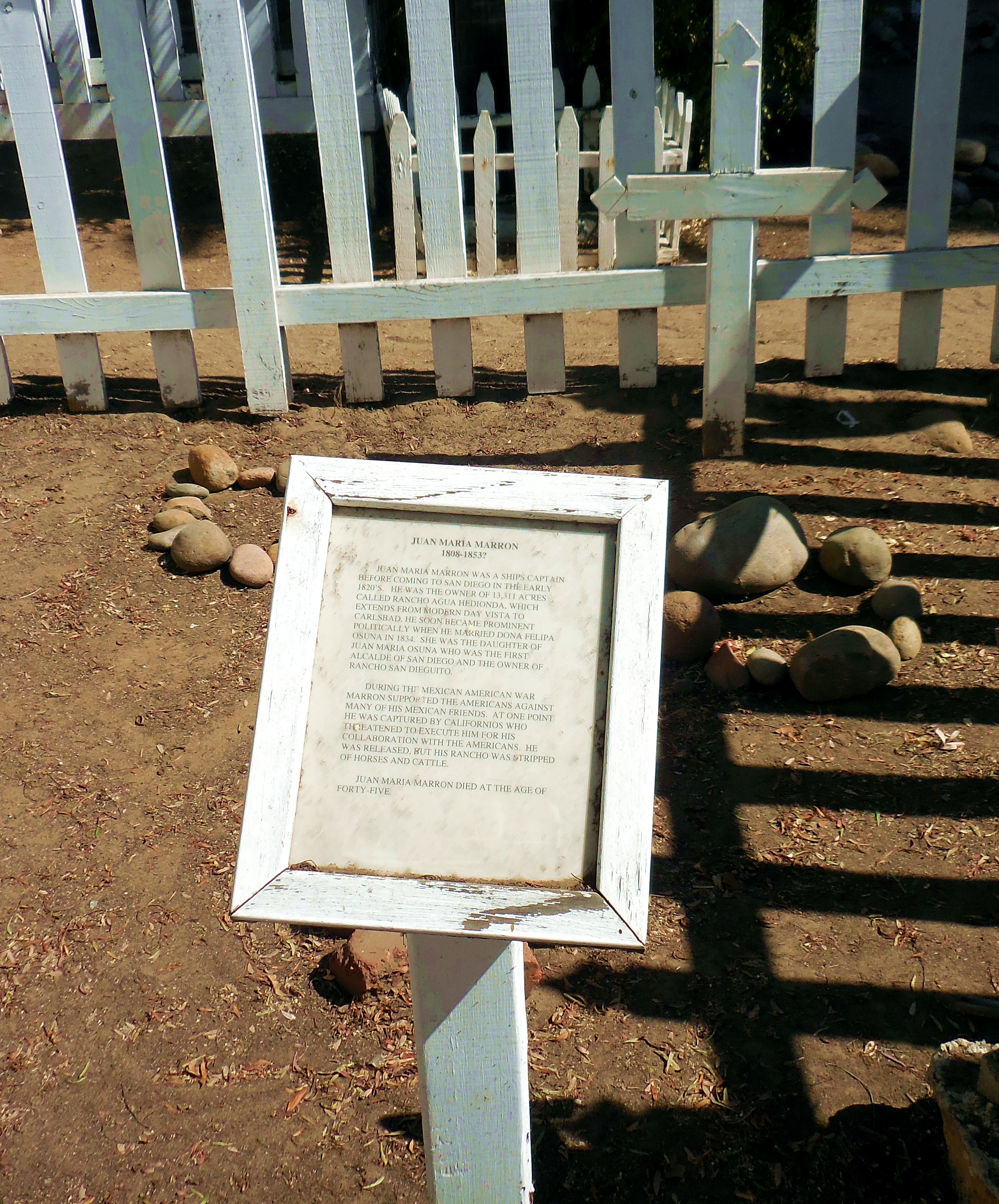 This is the grave of my other great-great-great grandfather, Juan Maria Marron who was born in 1808 or 1809.  From researching historical records there were many people with very similar names born at the same time in San Diego.  The re interred graves caused some more confusion but my ancestors are there somewhere and more importantly their spirits live in the modern city of San Diego.   Juan and Julian’s children married and are my great-great grandparents. 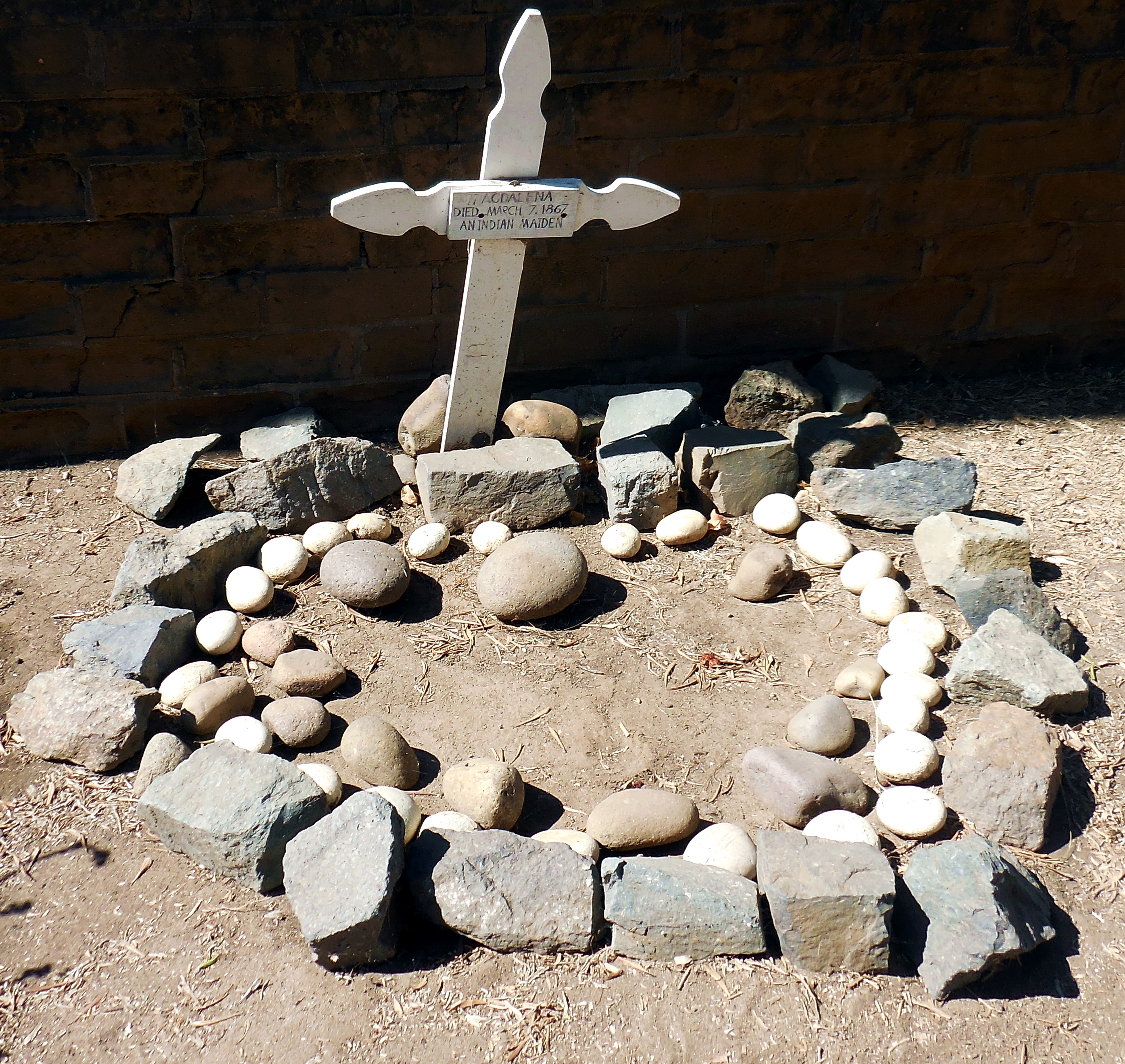 Grave of an Indian Maiden

Of all the graves I looked at, this grave of an Indian maiden pulled at my heartstrings.  Did she die of a European plague such as smallpox or flu?  Or perhaps life was just harsh back in those days.  So many women died in childbirth although I think referencing her as a maiden means that she was without children.  Then my mind wandered to my Mestizo heritage.  Was this a maiden taken from Mexico or a local native?  Cemeteries are so interesting, especially if you have a personal link.  In those days, San Diego would have been paradise, good weather, fine farming and seas full of fish.