How many cute wee faces can you see?

I always loved the names for groups of animals but the real name for a group of bats is a cauldron of bats. That is just superstitious nonsense – look at those cute little furry faces!   I think there is at least three of them – a mama and two babies, perhaps.  On my very first internship at Chester Zoo in England, I helped edit the zoo magazine which pictured a Dominican Republic fruit bat which the zoo had saved from the edge of extinction. Fruit bats are terribly important to our ecosystem. Their guano or poop fertilizes both the soil and the fruit trees. What would we do without our guavas or bananas or fruit bats?

Just as I was leaving Jaltun Parque near Celestún in the Yucatan Peninsula, Mexico, my guide, Senor Ortega, pointed out the fruit bats nestled in the palm tree. I tried so hard to get a great photograph but this was the best I could process.  When we lived in Cairo, we were woken up by a strange thumping in the back garden.  All we could see in the dark were fallen guavas but then we made out the faint outline of fruit bats knocking the guavas out of the tree and picking them off the ground.  When we lived in our first bought house on an estuary in North Wales, my mum’s cat Tibby came to visit and was terrified by the strange ‘birds’ that flew right at her with their radar.  We have bats in our back yard but go to bed too early to see them…sleepy Teddy and Bunny.

The park also had some orchids 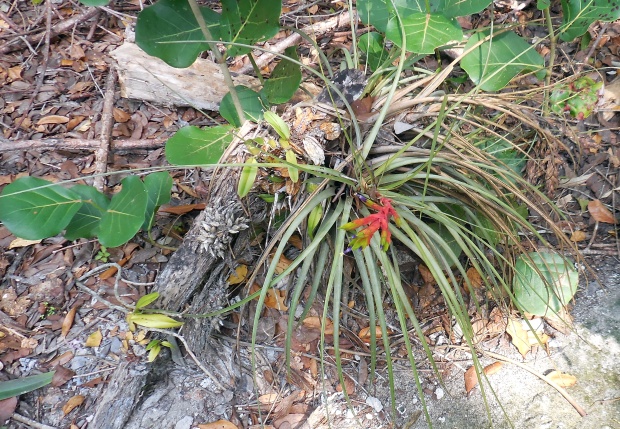 The spiny tailed iguana pictured in the last blog lives in hollowed out logs.

Can you see his little face?

This is a slightly better shot of my pensive heron with the terracotta water below.  Celestún is an isthmus and just before you reach the beach area you cross over the first body of water.  It looked so tranquil.

What was he fishing for and with what? 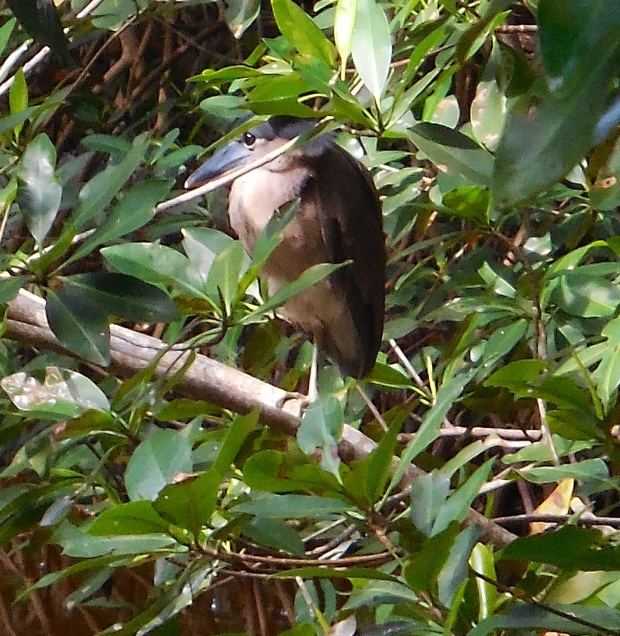 Pensive Green Heron.  I think this is my favorite ever shot

Angel, my driver in Merida, was intuitive about what I was enjoying.  I got very animated about nature ‘naturalis’ and he suggested that we go to Celestun the day after visiting Mayapan and Dzibiltchaltun archeological sites.  Celestun is famous for its large flocks of pink flamingos that live on what is now a nature reserve.  It is a small beach town situated on an isthmus in the Gulf of Mexico, right around the corner from the Caribbean.  The night before I excitedly googled the area and was concerned about the small boats that take you out to see the flamingos (fear of water in small boats).  Additionally, some of the articles mentioned that the influx of tourists was affecting where the flamingos nested.  They keep moving further away from humans.  I knew the beach would be magnificent but noted that there was a small Nature Park, Jaltun Parque Recreativo, just before the town.

This was a common black hawk. Common for the Yucutan… There was a nest close by.

Angel looked at me quizzically, as he had never gone there before, but followed his GPS and we arrived at a scrubby bit of jungle.  I looked at it uncertainly not knowing that this was going to be the cherry on the cake in Mexico.  No one spoke English but the gentleman who guided me had his wildlife book in both Spanish and English.  We excitedly chatted and I discovered that he was an Ortega – my cousin!  It takes me a while to get my eye in, when hunting for critters, but my guide was an expert.  He could identify every bird song, every tree and all the critters. It’s amazing how you don’t really need a common language when you are in tune with nature.  I perfectly understood that he was telling me about the wonders of nature – one tree, very close to another, was very toxic but the other provided the antidote.  Most of the animals were in the jungle but there were a few in small caged areas. 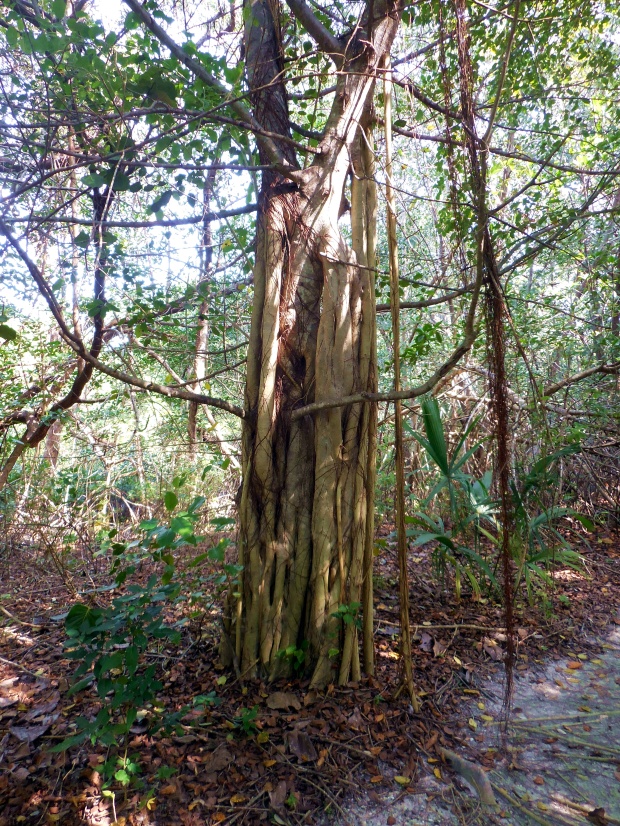 This is an African tree, planted by birds! 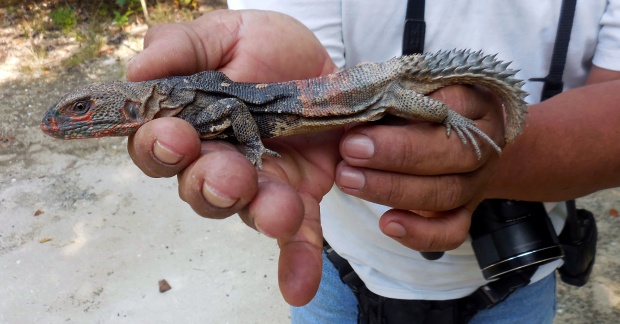 One of them was the Yucatan spiny tailed iguana.  I asked Senor Ortega if I could hold it and he explained,with concern, that they were very fast and I would have to hold it firmly behind the neck.  As an expert lizard catcher, I eagerly held out my hands.  It was a chilly winter morning in Celestun and the poor wee thing was cold.  I snuggled it into my sweater for warmth, delighting in the opportunity to be up close to an indigenous critter.

Carpenter Woodpecker Stop tapping so I can get a decent shot!!!

My guide was delighted at my derring-do and we walked into the jungle where he heard a carpenter woodpecker.  We tracked it down and he was more excited than me!  I knew my camera wasn’t up to a good shot because the woodpecker wouldn’t stop tapping but patiently waited for my guide to get just the right shot!  He was terribly impressed by my ability to track quietly and see birds.  Ah, that native DNA comes in handy at times…

This is a shot of a Morelet Crocadillo  just gently basking in the stream.  I have seen many alligators and crocodiles but that might have been my only opportunity to see this particular crocodile that is found only in Central America.  Just call me Crocodile Kerry…

A special treat was to pop my head inside the boa’s enclosure and take a shot while they were both hissing at me.  When I got back to the car, tired and happy, Angel looked horrified at my shots of serpientes and shuddered!  Off we drove, along the road into Celestun.  It struck me afterwards that I had been cuddling all sorts of critters and it didn’t even cross my mind to wash my hands.  This might be why I got a parasite in Egypt.