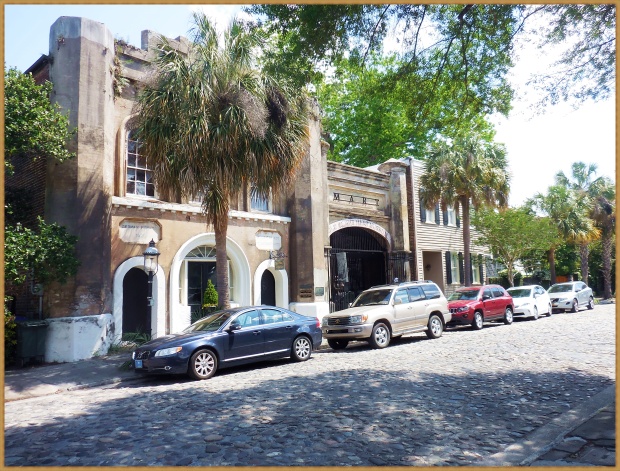 I considered writing about the beautiful aspects of Charleston, South Carolina but thought I would reveal its darker side first. This innocuous building might lead you to think that they sold anything other than humans. Charleston was somewhat of a hub for slave auctions which used to be on street corners. Despite owning slaves the residents didn’t want to see children and elderly people in shackles, so the auctions went indoors. This was one of 40 slave marts in historic Charleston at the height of slavery. When I paid for my ticket, I asked one of the docents if Native Americans were also enslaved. Apparently they were, but they were too good at running away. When they discovered the soil was great for growing rice, they really wanted slaves who were farmers.

It was a very moving exhibit, as you can imagine, and appalling to read about humans traded like cattle. I was not surprised but some visitors were deeply moved and the whole museum had a reverential feel, as well it should. Charleston was and still is a very wealthy city, reflected in the buildings and residents but I think it is important to remember why that is. No-one is without blame – some northern states had a horrible history of indentured workers including children and they may as well have been slaves. My own husband was born to an indentured servant at a farm in Scotland in 1958. It was well known that some farmers felt it was their right to have sex with the women. Teddy was the third sibling born to this 33 year old woman and given up for adoption. Glasgow, the city where I grew up, became rich on the back of shipping and tobacco from the Americas. It is no coincidence that many African American people have Scottish names.

Before I left, I spoke to the docents at the desk. I admired their museum and said we have not learned from our mistakes since the port of Houston is the hub of human smuggling into North America. They both looked at me blankly and I sensed that they felt I was taking something away from their story, which I was not. The ethnicity of today’s slaves may have changed and it is illegal but some of their stories are even more horrific than those in the museum. One of my friends, living a couple of miles from me, couldn’t get into her own street one day because of police vehicles. Her south-east Asian neighbor was trafficking young girls into prostitution but was living a regular middle-class life in an affluent area.

The next post will reveal a sunny and optimistic modern Charleston.