The Church of Our Lady of Guadalupe in Puerto Vallarta

There is something about this photograph that summons up the feeling I get when I am inside a church. Sometimes I enjoy going to a service but mostly I like the silence of an almost empty sanctuary. On this hot day in Puerto Vallarta, it truly was refuge from the busy resort. The Church of Our Lady of Guadalupe is not a cathedral although it is often called such. Perhaps it is because of the beautiful baroque crown that is said to be a replica of Empress Carlota of Mexico’s crown.

I was utterly fascinated by Empress Carlota whose existence was unknown to me. Napoleon wanted a figurehead for Mexico – Archduke Maximilian of Austria. Emperor Maximilian married Empress Carlota (Charlotte of Belgium) in Mexico City 1864. This is a link to the Wikipedia page about the Empress which is an almost fantastical tale of the brief influence of France on Mexico. 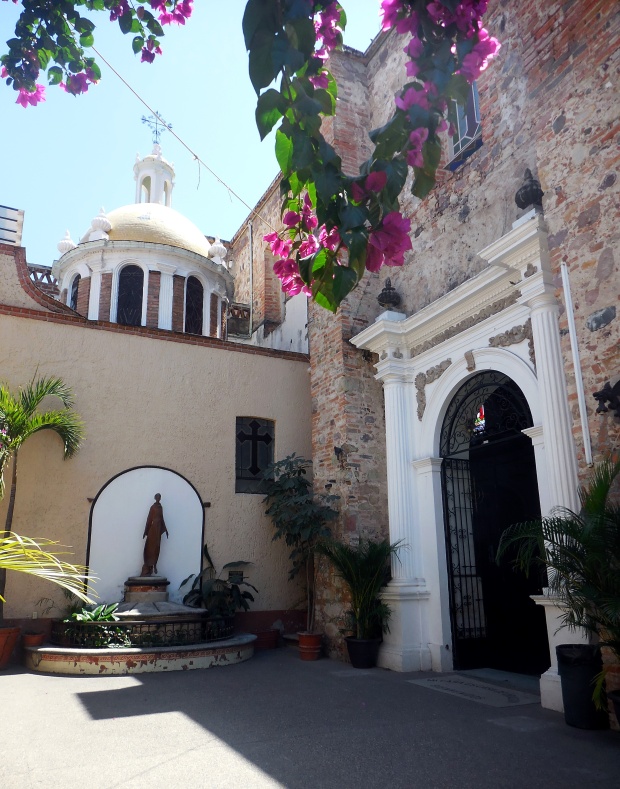 Mexico has held me fascinated since I discovered that many generations of my Ortega family lived in various states of Mexico. Until recently I didn’t think I had any connection to the state of Jalisco (in which Puerto Vallarta is) until I found an ancestor on Familysearch, Felipe de Jesús Quintero Rosas who was born in Poncitlàn in the late 1600s. Don’t Spanish names sound so romantic? I now regret my haste to get rid of mine when I married. I so longed for an ordinary Scottish name so I could blend in. Only as you mature, do you realize how important your uniqueness is.

When I moved back to the USA over a decade ago, I was slightly surprised that there were so many Spanish speaking Protestant/Evangelical churches in Texas. Somehow I thought they would all be Roman Catholic. This car in Puerto Vallarta amused me…😇