During Hurricane Harvey, my husband, Teddy, was stuck in Utah because the flights were cancelled into Houston. We had talked the day before he was due to leave and he was running out of Gabapentin because like most of us, we only pack a couple of days extra medication. I suggested he call our health care provider and see if they could send a prescription because it is dangerous to not taper off this medication, which was prescribed for his migraines. Like everyone else, we had no idea that Harvey was going to be such a catastrophic weather event and initially I suggested he taper his drugs by one third.

Then he complained about a rash from bug-bites. Not so; it was undiagnosed shingles! He noticed it the day of the eclipse where he was outside in very hot temperatures taking photographs. Somewhat ironically, Gabapentin can be used to help with the nerve pain of shingles so he probably didn’t feel the nerve pain initially. After the hurricane hit, Teddy was still stuck in Utah. When he called me, I asked him if he could talk me through using the WII Fit which I haven’t used in years. Like most married couples, technical issues can create a divorce inducing argument. Teddy raised his voice at me (during a flipping hurricane!) and I immediately shouted back. It is his fault for provoking a Hispanic/Irish wife…

During our ‘conversation’, I realized that Teddy was very upset and I backed down, concerned for his health. Eventually he traveled from Utah to Denver to Austin and intended to drive home from there. The weather conditions were still too bad for him to reach our home with most roads blocked. By this time he had to go to Urgent Care for more blood pressure medication and then the rash. Curiously, the Medic diagnosed it as bug bites and prescribed an antibiotic cream.

Finally, he made it all the way home and suddenly his strange mood made sense. We were both a little tearful when he returned because no matter what I said, it was really scary not knowing what would happen next with the weather. When he showed me the rash I recognized it as shingles. Our own doctor prescribed anti-viral medication for him which helped reduce the spread of the rash which was also hurting at the front of his chest. Shingles is infectious and you can spread the chickenpox virus. I caught chickenpox when I was about 30 and I thought I was dying – it is much more serious in adults. He is now well on the road to recovery from this second bout of shingles and he will get the vaccine when he is better. (I have stopped quarantining him…and removed the red cross from the door).

On a much lighter note, we went to Nordstroms’ Rack a few weeks ago for Shrek size shoes for Teddy. He insisted on buying these Psycho Bunny boxers – what do you think he is trying to say to his Bunny??? They are extra cute, though.🐰

Mrs. Stripe playing with mum in the dappled autumn sunlight.

Life has been very challenging recently and I hoped that three bad things were enough but not so. Last week we had to have our beloved Mrs. Stripe put to sleep at the veterinarians. I had mentioned previously in a post Mrs.Stripe and the pharmacy that she had severe muscle deterioration in her hind quarters which along with arthritis was causing her pain. On the last visit we shot her up with everything available and it was lovely to see her vibrant spirit emerge when she was pain free. The medication stopped working despite doubling the dosage and she was struggling to breathe through snuffling from an unrelated allergy problem that we could also not treat. Teddy and I talked about what we best, especially given that she was at least 15 years old and a feral street cat. We both agreed that we couldn’t bear to see her in pain and she finally made the decision for us.

I was sitting on the sofa, the night before we took her to the vet, and for the first time in her life she sat on a human’s knee. I looked at her in astonishment but she just settled down like she had always done it. The heat emanating from my knee must have soothed her poor little joints but I had no doubt that she was saying, “Please make the pain stop”. It was a sad day at the vets and almost all staff was in tears both at our sorrow and losing such a special patient. Even in her last days she played with her knitted catnip Spiderman, mewed plaintively for treats and even seemed to smile. She often made us smile see the post Resolution No 1 – wash more.

The house is in mourning and her daughter, Toffee, who is 13 years old, is wandering around the house crying. Zhenny, our other cat, has retreated into closets; occasionally giving us the odd cuddle but mostly biting us. We have euthanized many older pets but Mrs. Stripe was possibly my favorite. I became very mentally unwell when we moved to Egypt and when I caught glimpses of her in the garden it lighten my burden. She is probably half Egyptian Mau but has a bit of European Ginger which gave her fur the most gorgeous Titian highlights. She was exquisite and I couldn’t keep my eyes off her. I had no intention of looking after her until she had an injury. See my original post about our first meeting – Mrs. Stripe. Right to the very end of our posting in Cairo I wasn’t sure if she wanted to come with us – she was essentially a wild animal. One day she just made up her mind to stay in the house and we had to rush to get her neutered and vaccinated for the trip to America.

The veterinarian placed her in a beautiful blue shroud and we have buried in her beloved garden. Like most immigrants from third world countries, she loved her adopted new land and the odd new creatures she observed such as skunks and raccoons. She loved us and we will always love her. RIP Mrs. Stripe. 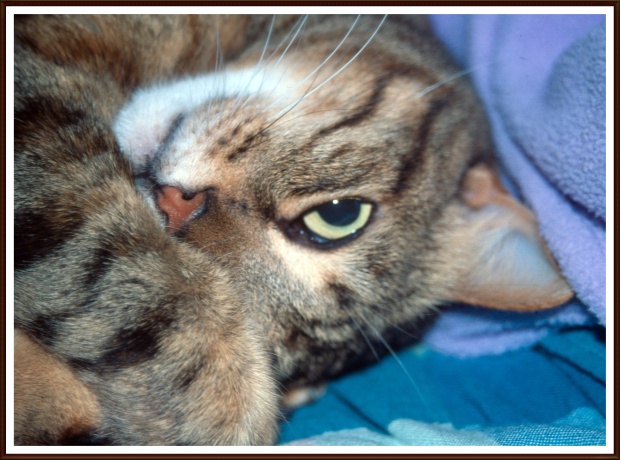 Mrs. Stripe, the oldest of our three Egyptian feral cats, has had a painful week. She is about 15 years old and has considerable muscle deterioration in her back legs from early acrobatics across the rooftops of Cairo. She is on Gabapentin but this week I noticed that she was struggling to sit down on her back legs. Given her age and feral nature, I was convinced that we were taking her to be euthanized but once again she was saved for a little while longer with an opiate injection, some NSAIDs and an increased dose of Gabapentin.

She was hilarious when she came home – feeling no pain, eyes completely black and looking for trouble! She also had the munchies and we had to keep feeding the beast. The other two cats, quite wisely, kept out of her way. At one point we found the rug my grandmother made at the other side of the living room. I guess she had used it in an Arabian Nights scenario?

I asked if we could take the prescription to our local pharmacy as they now do pet medications (the ones that are the same as human drugs). The cost dropped from about $50 to $8 a bottle, so it was a considerable saving. When I went to pick it up today, I wondered (again) why we decided to call her Mrs. Stripe instead of just Tiger or some such. “What is the patient’s name?” Giggles from me, followed by “Mrs. Stripe”, to which I got a raised eyebrow. Then I had to fill in a digital form which queried – SELF or AGENT. Now I was really laughing, “I guess I am Mrs. Stripe’s agent, then.” I have no idea why the pharmacy technician didn’t think it was funny too. I was going to say that Mrs. Stripe would have come herself but God had forgotten to give her opposable thumbs.

In a unusual moment of good sense I thought that my comment might offend someone from the evangelical south. Just as well God didn’t (give her thumbs) because she would be doing do-nuts in the Challenger, stealing credit cards from my purse and other dastardly deeds.