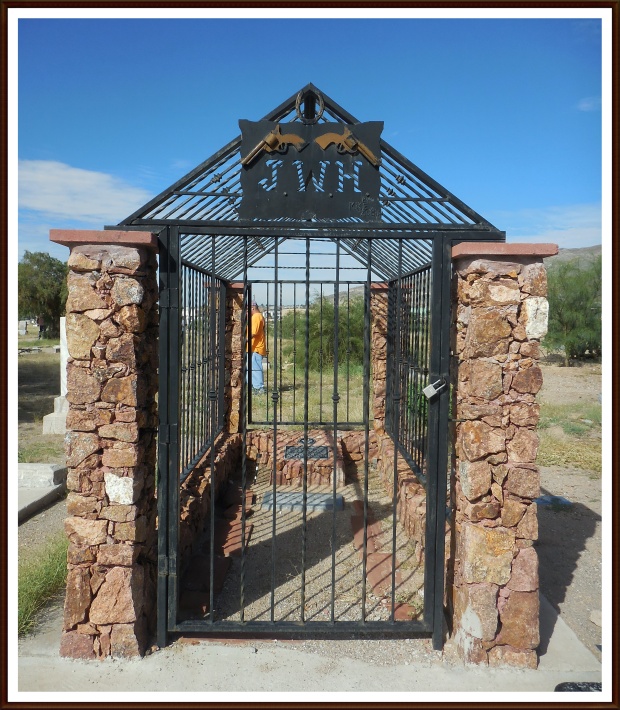 Don’t you just love this photo of the cemetery of John Wesley Hardin (1853-1895), gunslinger extraordinaire, in the magnificent Concordia Cemetery, El Paso? He is still in a jail cell after death and his defense for his various killings was “I never killed anyone who didn’t need killing.” There is no response to that really; he was just a bad ‘un. The best part about the shot is that you can see a man in an orange t-shirt through the bars. He was part of a group of prisoners cleaning this famous cemetery. Some of them looked very intimidating and they were really staring at me but perhaps they ain’t seen a cougar for a while? This is a link to Concordia’s Cemetery website in red. Listen to the song that plays along with the post about JW Hardin. Somehow it summons up the old wild west of Texas as did this cemetery. It was bought and divided into various sections by city groups, Chinese here, Masons there, Catholics in a separate place from Jesuits. Any Catholics out there will know that’s a good thing – Jesuits are scarier than gunslingers…

I love that this shot summons up every thing good about Texas. Skies that go on forever and eclectic people in life and death.

My guide Rudy, see my previous post,‘A tour of El Paso’ certainly had my number. What better place to visit than the cemetery and then Fort Bliss, the biggest military base in Texas – cool. Look at that warhead and the old tanks! 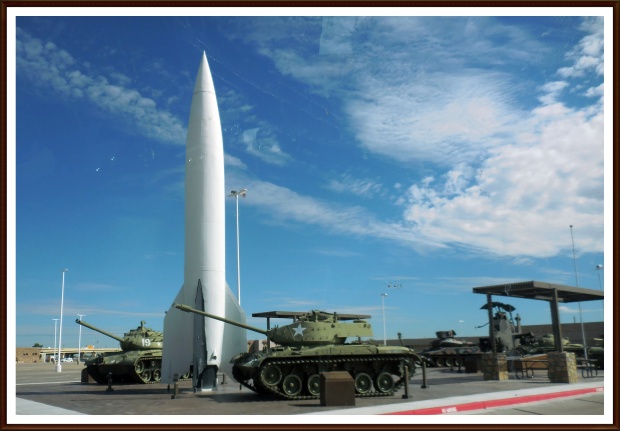 I have never been on a military base and this was astonishing – a complete small city. There was a town center, shopping mall, restaurants, cinema, schools and various suburbs for want of a better word. Rudy took us past the very large house that General Patton lived in and I was just awestruck. It could have been an upmarket suburb like any in my area, except the view was better. Rudy was a veteran and it was nice to see that the guard on duty saluted him with great respect (we had to show our driving licenses for security). This a link to the Wiki page about Fort Bliss. I could see that the terrain and temperatures would really help training fighters going to places like Afghanistan.

Rudy took us to see original adobe houses from the 60s up and down mountain tracks to get good views, right up to the border so that we could see what Juarez looks like – poor. I didn’t manage to capture photos of the amazing University of Texas at El Paso The architecture of the college is based on Bhutanese Monasteries and the red link tells you a little more about it. 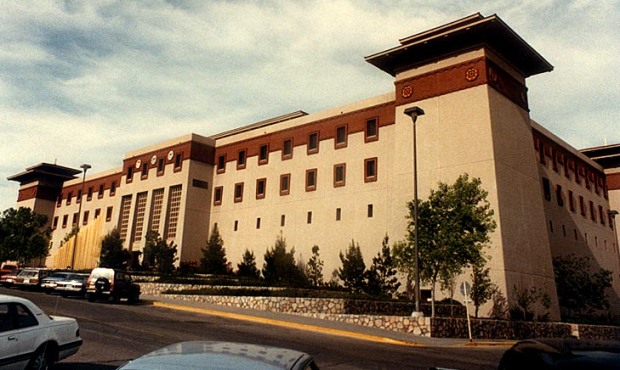 It was a perfect tour of a perfect city. This is a view towards Cuidad Juarez and the writing on the mountain side reads “La Biblia es la Verdad. Leela.” or “The Bible is the Truth, Read It.”

Can you see Valentina sitting on our fence beside the crape blossom? She is a young American black vulture who was investigating our back yard. I don’t really know that she is female or called Valentina but she has an exotic black cloak on and mysterious brown eyes. We live in a forest in near Houston, Texas and regularly see all kinds of critters including Black and Turkey Vultures. In some areas Black Vultures, which are a protected species, are becoming very common but we have plenty of carrion for them to eat given the lack of driving skills…

You can get a really good look at her in the shot above. They are large birds and I guess she was about 3 feet tall with very big white feet. They are a successful species because they eat live prey alongside carrion. When Mrs. Stripe used to laze about on the deck, I would tease her that the circling vultures would eat her if she didn’t move. I don’t really understand why people think they are ugly – I thought she was rather beautiful in an Addams family way. She was quite curious about us but tentative.