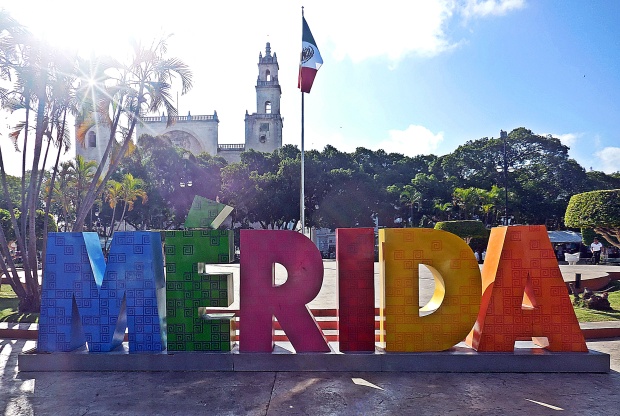 I closed my wonderful hotel door in Merida and looked around my room.  There was a four poster bed, patio doors opening onto the small pool outside.  Even though it was now dark, there were little lights illuminating the pool, columns, archways and muslin curtains outside.  The room was simply furnished in typical Spanish/Mexican style but had a large flat screen TV and Wifi.  The bathroom was commodious and modern with wonderful limestone tiles.  It was chock full of prehistoric critters and I remember thinking that Teddy could have written a thesis about the tiles.  There was a tiny bit of black mold in the corner of one ceiling but it was an old building prone to leaks in rainstorms – much like our house (and it’s new).

The hotel was very quiet and it was incredibly hot.  I put on the air conditioning unit and the large fan.  At home I keep the temperature at about 78 degrees for most of the year so I am used to tolerating hot weather.  We lived in Egypt for two years with minimal air-conditioning.  My flight didn’t arrive until almost 9 pm so now it was well past my normal bed time.  The bed was comfortable and despite the heat, I drifted off to sleep under the sheet.

My dreams were all about sound and light shows and later I realized that this was because the power was flickering in and out all night creating a light show with the little outside lights.  Both the air-con and the fan were generating a crescendo of noise from going on and off.   Ah, the joys of foreign travel.  In the morning, one of the staff came to my door to explain that the power would be going out so that an electrician could work on the hotel.

“Not a problem,” said I, blithely, and thoroughly enjoyed the breakfast before lights out.  There was real natural yogurt, honey, local fruits, jellies, toast and granola.  A virtual feast.  Since the power was going to be off, I decided to set off to see the city even though it was early on Sunday morning.  The local residents were busy setting up the main Plaza with market stalls and half of the old town was barricaded off for a bike race.  Race is too strong a word – perhaps a meander?

Merida was exactly what I expected and a little more.  It was a regular city not dominated by tourism with many beautiful Spanish colonial buildings.  Not everyone spoke English but I was able to communicate with my bad Spanish.  I admired some beautiful cotton drindl skirts in vivid colors and the white haired Señor asked me if he could help.  I remembered the words for just browsing – “Solo mirando, gracias!” and I received a smile with no pressure.  All of America was enduring a heatwave and I noticed the local people, many of whom were indigenous Maya, were struggling to keep cool.  I was already getting over-heated so went back to the hotel to change into something lighter.  The electrician was still hard at work.  It was difficult to see in the closet with no power but the room was naturally cool.

I set off again to take more photos and enjoy the city sights.  I was feeling a little weary but I metaphorically shook myself in anticipation of a wonderful vacation.  Oh, I spoke too soon…. 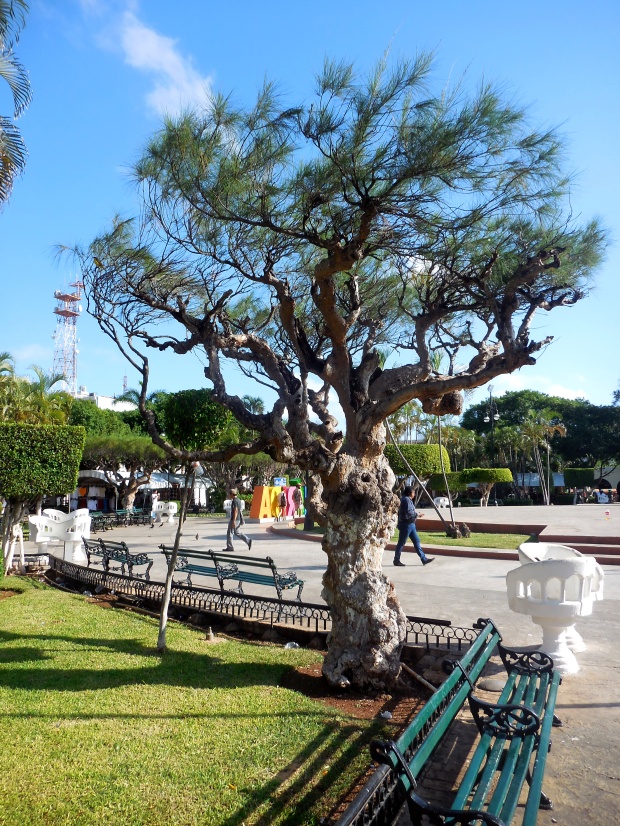 There were love seats all over the plaza and I noticed couples kissing openly – sweet! 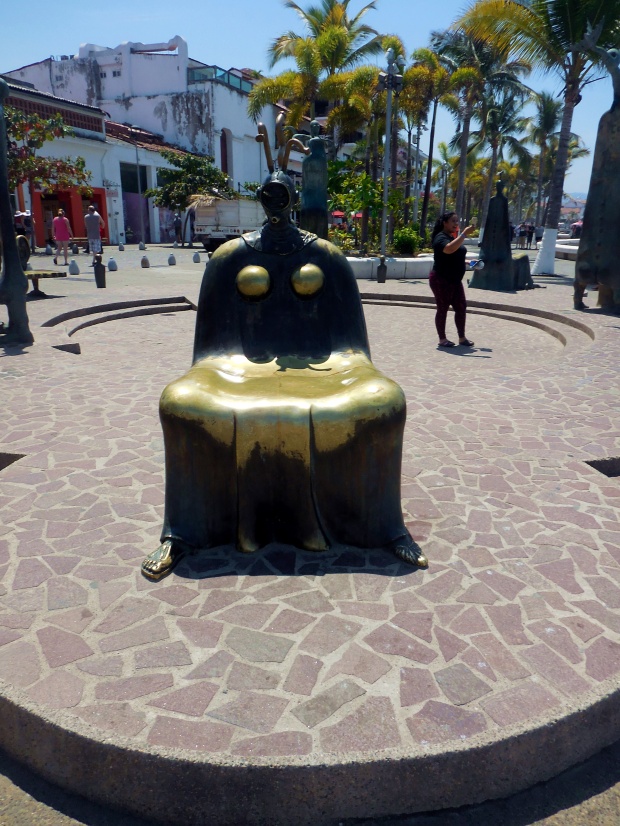 I wonder if the artist realized that his sculpture would have well-polished boobs when people sat on the seat? It certainly stood out and probably makes more people sit on it. One of the many aspects of Mexico that I love is that art is available to all in the form of murals, architecture and sculpture. Puerto Vallarta has the most amazing collection of sculptures along the promenade. The views of the beach and mountains are spectacular alone but the art adds a quirky touch. 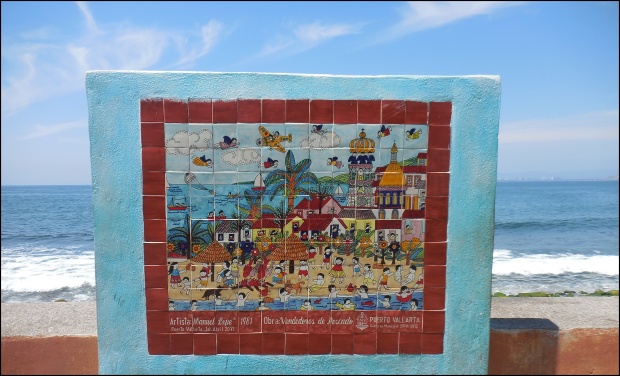 There is a thriving ceramic industry in the town and I particularly like the situation of this simple tile. 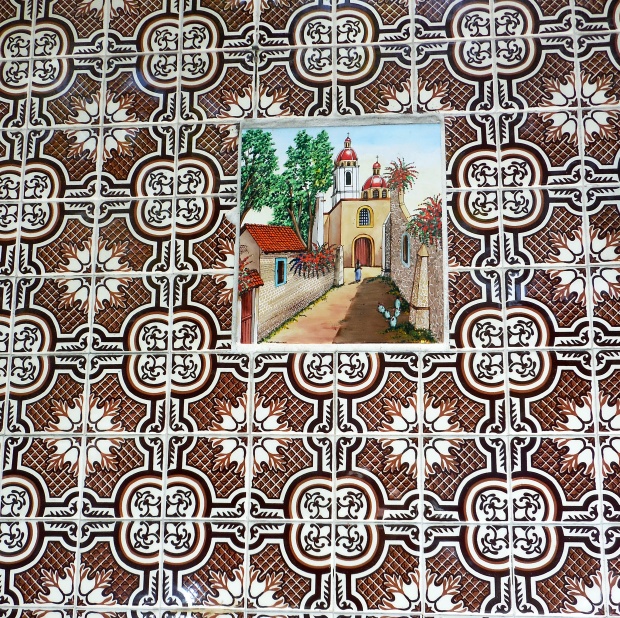 These tiles were on a simple building in the old town but added to the art. 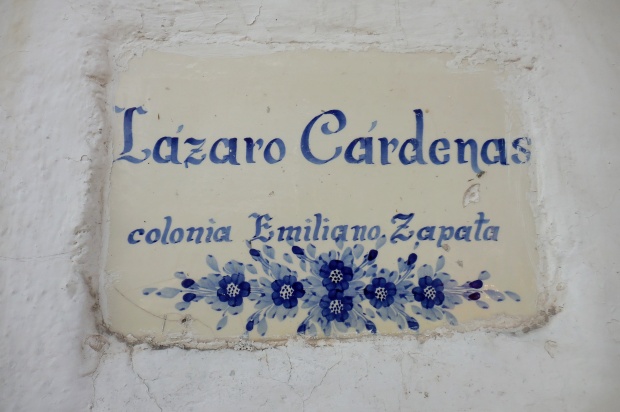 Even the street signs were beautiful – this was the name of the street where I was staying at the Hacienda. 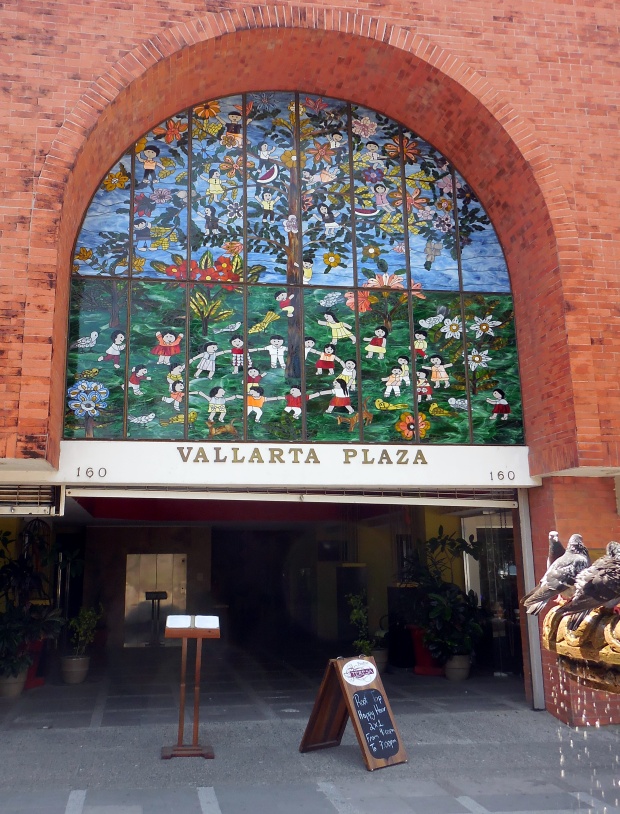 Inside the Plaza was a treasure trove of hand-made goods from embroidered clothes, locally made rugs and ceramics. I really do not need another ‘artifact’ in my house but it is still nice to browse, “Solo mirando” 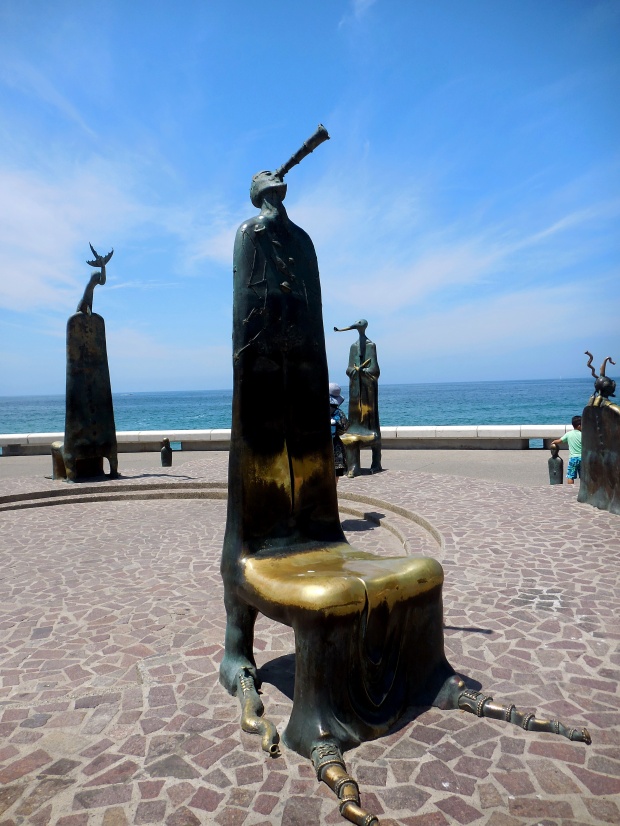 There is something about this group of sculptured seats that just captures my imagination. They look like something out the movie Fifth Element and I could have looked at them all day. Art soothes the soul and the more accessible it is, the better. 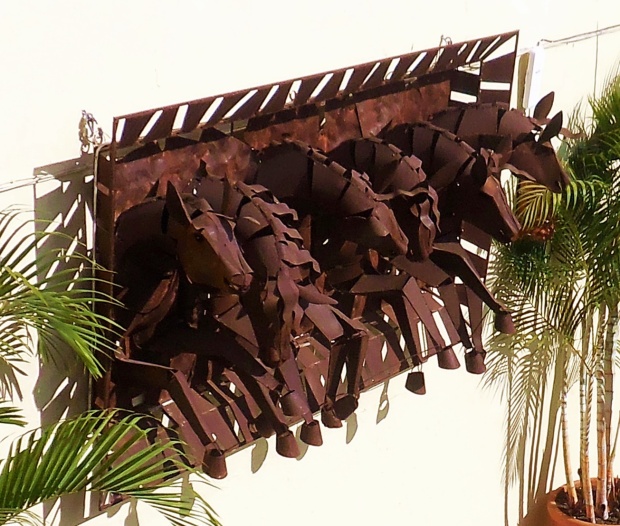 After Thanksgiving we went on a short trip to Puerto Vallarta in the state of Jalisco, Mexico. We have been scouting out possible retirement locations. I wanted to stay in the old town and we chose a very well recommended bed and breakfast situated in an original Hacienda. Oscar picked us up at the airport and whisked us back to the Hacienda. Escondida means hidden and it really is. It is on a cobbled street that leads from the beach up to the mountains and there is just a beautiful arched door leading into this wonderful oasis. I loved the horse sculpture that was above the small swimming pool, right outside our patio doors. 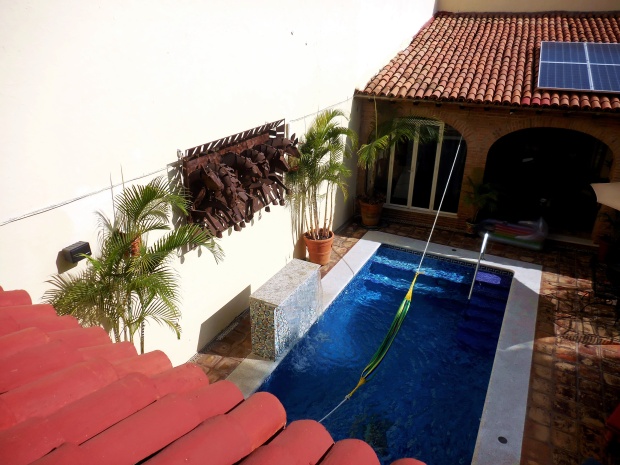 Our suite was beautifully appointed with local ceramic tiles in the bathroom, a small kitchen and seating area, right by the pool. The property has a huge Banyan tree and there is a fun tree-house with seating, a TV and bar. 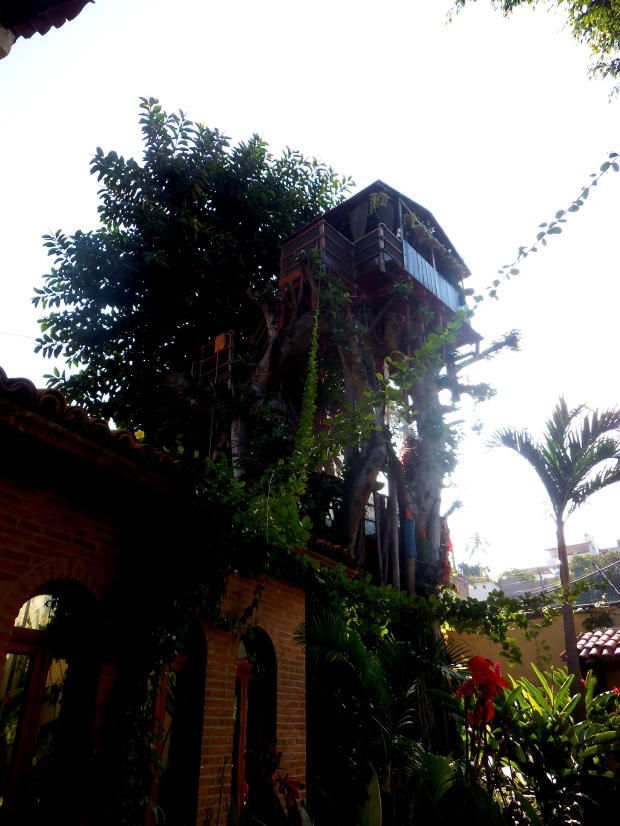 The gardens in the Hacienda were amazing, full of delicately tended flowers and bushes. These attracted quite a variety of butterflies. More lovely photographs to come.  Click on the red link for the Hacienda Escondida website. 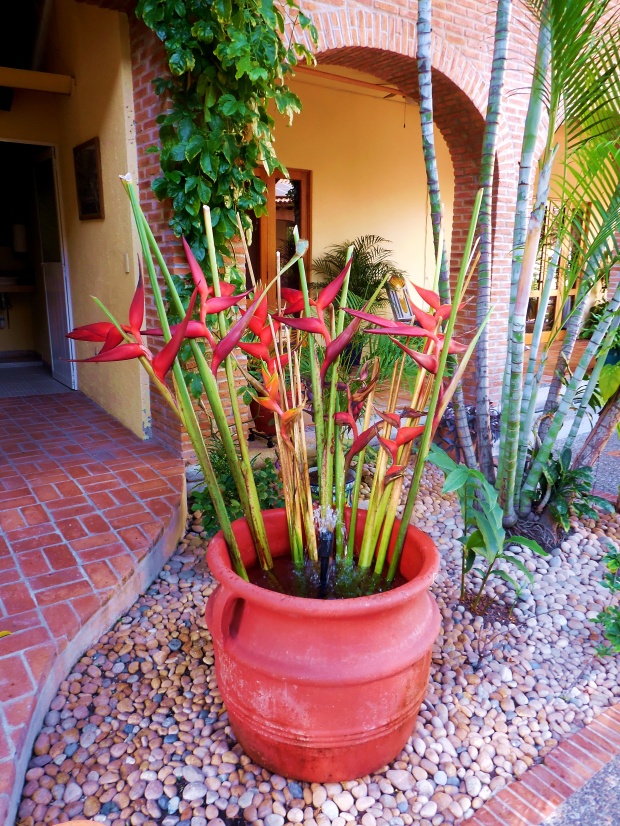