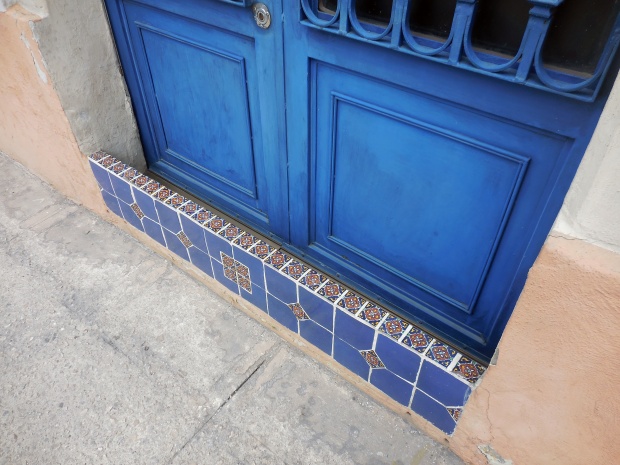 I should have put some money in the collection plate but I always reverse when there are nuns. So, now the power is off for at least a day or two at my first wonderful hacienda. I skipped down the pavement to the second hacienda which still had power. As we walked into the entryway I was pleased to see that it was almost a mirror image of the first hotel; it was actually rated more highly. The manager showed me the first room available but it was incredibly dark with very high ceilings – something out of a Guillermo del Toro movie, perhaps? It was also a smoker’s room. My nose started to wrinkle with disappointment and they showed me the only other room. It too was smoky and similar to the first one – it’s only advantage was a dark window looking onto the pool at another room like the first perfect one. There were no more rooms available. Sigh.

I sadly drooped back to my first room with some portable lights so that I could pack my bag. By this time, my clothes were soaked through for the third time with the intense heat and humidity. After I moved into sinister room #2, I had another shower and decided to have a nap in bed. I kept looking up into the ceiling beams and seeing ‘things’. They were probably dead cicadas or spiders but I was now on an imagination roll. As I lay in bed, I thought about what I could do.

• I could try to find another hotel but now the WiFi was out and it was too hot to wander about
• I could visit the wonderful museum with Maya artifacts
• I could go to the fancy shopping mall
• I could take the bus to Progreso, a seaside resort, but it was 3 hours on the bus.
• I could take a guided tour in a car to one of the ruins/cenote

These were all part of my original plan but I was feeling really sick with the heat and what latterly turned out to be virus (we had a flu virus in Houston). What did I really want to do? Go home was the simple answer but given that I had just done something similar in Puerto Vallarta, I was wondering if I was over-reacting. I tried to self-diagnose and my conclusion was that I was not anxious just fed up. Finally, I decided to go on one last walkabout to get some snacks from the local shop. My room was so dark that I hadn’t realized that the sky was ominous. I took two steps outside and then changed my mind and came back into the hotel. Within minutes a tropical thunderstorm had started with flash flooding. I looked with fascination as the pool started to overflow and then asked if I could use the phone to speak to United Airlines in Mexico.

The representative was very helpful but yet again United screwed me again with a $200 change fee to go home the next day even though the flight was not full. The night staff looked upset that I was leaving but I think they understood. After the phone call, I arranged for a wake-up call at 4 am (one early flight a day from Mérida). One young man working at the hotel reminded me of Agador Spartacus in the Birdcage movie but he was wearing shoes. He offered me a drink and brought me a plate of lovely snacks. Agador explained in halting English that the crackers were like communion wafers and covered in delicious tomato and avocado salsas. Since I had gone to bed at 6 pm, I was fully awake at 2 am. That was fortunate because the night porter slept through his alarm. I could see the taxi driver through the gap in the door but struggled to unlock the big old door. Finally, the porter came running out half-dressed and bid me Adios!

When I got to the airport, there were no United representatives at the check-in desk… The cleaning staff explained that it didn’t open for another hour even though I had been told to be there precisely three hours before departure. Teddy was waiting anxiously for me at immigration in Houston but seemed relieved that my mood was fine. So that concludes the disastrous trip to Mérida but I will post some lovely photographs next week and I will definitely return…

I considered writing about the beautiful aspects of Charleston, South Carolina but thought I would reveal its darker side first. This innocuous building might lead you to think that they sold anything other than humans. Charleston was somewhat of a hub for slave auctions which used to be on street corners. Despite owning slaves the residents didn’t want to see children and elderly people in shackles, so the auctions went indoors. This was one of 40 slave marts in historic Charleston at the height of slavery. When I paid for my ticket, I asked one of the docents if Native Americans were also enslaved. Apparently they were, but they were too good at running away. When they discovered the soil was great for growing rice, they really wanted slaves who were farmers.

It was a very moving exhibit, as you can imagine, and appalling to read about humans traded like cattle. I was not surprised but some visitors were deeply moved and the whole museum had a reverential feel, as well it should. Charleston was and still is a very wealthy city, reflected in the buildings and residents but I think it is important to remember why that is. No-one is without blame – some northern states had a horrible history of indentured workers including children and they may as well have been slaves. My own husband was born to an indentured servant at a farm in Scotland in 1958. It was well known that some farmers felt it was their right to have sex with the women. Teddy was the third sibling born to this 33 year old woman and given up for adoption. Glasgow, the city where I grew up, became rich on the back of shipping and tobacco from the Americas. It is no coincidence that many African American people have Scottish names.

Before I left, I spoke to the docents at the desk. I admired their museum and said we have not learned from our mistakes since the port of Houston is the hub of human smuggling into North America. They both looked at me blankly and I sensed that they felt I was taking something away from their story, which I was not. The ethnicity of today’s slaves may have changed and it is illegal but some of their stories are even more horrific than those in the museum. One of my friends, living a couple of miles from me, couldn’t get into her own street one day because of police vehicles. Her south-east Asian neighbor was trafficking young girls into prostitution but was living a regular middle-class life in an affluent area.

The next post will reveal a sunny and optimistic modern Charleston.

You might think that I dislike children from my last bluebonnet post but that is not exactly true. I adore perfectly behaved, clean, silent children… Curiously, most children seem to like me, a former nanny, and recently I told two young unsupervised children not to throw stones in the pond. They looked at me quizzically which made me wonder how often they were disciplined. I suspect that all young animals respect boundaries and instruction.

The exquisite Oleander bush above has amused me for a decade. It grows gloriously right in front of a kindergarten and it is one of the most poisonous sub tropical plants. I often walk past when the children are out playing and I wonder if any of the patient carers have ever been tempted to make some oleander smoothies. You would have thought the landscaper would have planted something different. 🙂

I noticed that my exquisite pineapple guavas flowered this week – aren’t they adorable? I always thought the fruit was ornamental but have now discovered from this wikipedia post that you can flavor vodka with them. Woo hoo! They are not really guavas but a member of the myrtle family.

Finally our glorious hibiscus bushes are in full bloom in the street. In Egypt, vendors would go around the streets selling hibiscus tea which apparently is good for high blood pressure. It looked delicious but where did the water to make the tea come from??? Sinister tea! 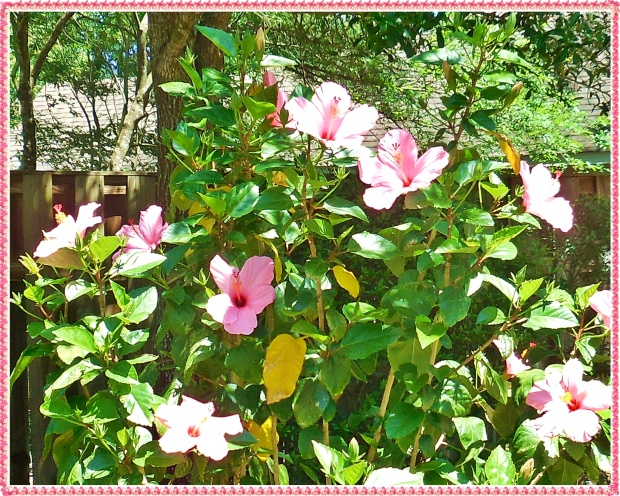