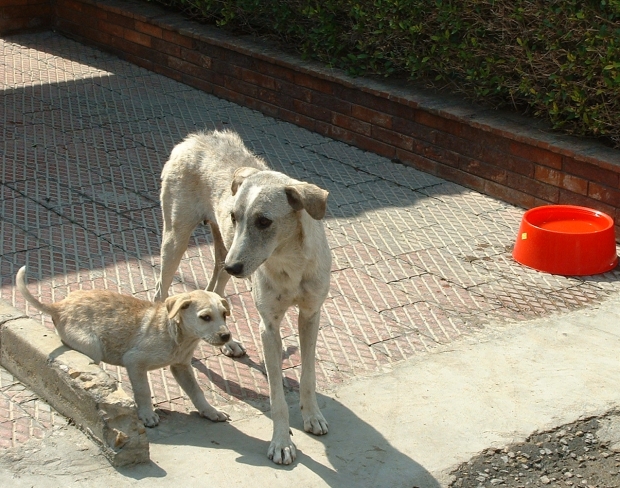 Well, I slept well last night and am almost back to my usual self. Above are our beloved Baladi dogs, Poochy and Puppy, that we looked after in Egypt. The word Baladi means local in Arabic and usually it is used to refer to the ubiquitous yet delicious flat breads sold on every corner. The expats, most of whom had never come across feral street dogs, referred to them as Baladi dogs. They all look much the same – skinny, sandy, short coated dogs about the size of a labrador. Normally, they are naturally cautious of humans and behave like a coyote would, especially when it comes to howling at night. Poochy, the mother dog, had been looked after by a Western expat from puppyhood until he left, so she didn’t know whether to behave like a pet or a coyote. She used to run to me for cuddles and I remember she put her paws on the shoulders of my clean white dress which was then covered in camel poop and goodness knows what else. “Poochy!!!”, I yelled, to no avail…

Just before a trip back to the UK we decided to take them to a Westernized animal boarding kennel where Poochy could recover from being neutered and they would be safe together for a couple of weeks. As soon as she was neutered by Dr. Farouk and safe to move we took her and the puppy across the Nile to the pyramid side of Cairo where the boarding kennel was. There was a new bridge but we got hopelessly lost so I made my husband stop the Jeep at a snack shack just before the flyover and ask for directions. Despite the impression you may get in my book, most Egyptians, especially Bedouins, are incredibly hospitable and the owner insisted that his son go in the car with us, onto the bridge and then he would get out (on an interstate) and walk back. Nothing we could do could persuade him otherwise.

The son jumped in the front with my husband and then glanced back to the back where Poochy and Puppy were whining inconsolably, throwing up and generally smelling awful. He looked at us in horror and incredulity – who would have Baladi dogs in their car? After he got out (and was paid handsomely) we knew that he would have ran back to his Dad and said, “They have Baladi dogs in the Jeep!” We just knew that his Dad would have said, “Don’t be ridiculous – they must have been Pharaoh Hounds! Rich people like that don’t keep street dogs”. It was a terrible journey but we all survived it and yet again had something to laugh about in Cairo.

Just another teaser to tempt you to buy the book – flagrant advertising!
This is the link to the book on Amazon US – http://www.amazon.com/Letters-Cairo-This-memoir-travelogue-ebook/dp/B015JFY1F0
If you read it (some may be able to borrow it) please give me a review.