The person that took this photograph of me in Charleston STOOD ME UP! I don’t recall ever being stood up before and especially not by a woman. Before your imaginations go off into the gutter about a bisexual fling in Charleston, it was just another lady guest at our beautiful hotel, The Fulton Lane Inn. I booked the hotel on Hotwire with one of those ‘don’t know which hotel is until you pay for it’ and was astonished at what a good deal it was. The hotel was right in the middle of historic downtown, perfect for a short stay.  To be honest, I expected it to be run down with cockroaches but it was truly a 5 star experience! To start with there was a complimentary breakfast which you could have delivered to your bedroom (for no extra cost) or eat in atrium of the main hotel, The King’s Courtyard Inn, where I am standing. Not only that, it was delicious – fresh pastries, juice, coffee, oatmeal, fruit etc. From 5 – 6 pm they had wine and snacks (also complimentary) in this atrium area, followed by dry or sweet sherry at 6.30 pm which you could take up to your room. This had to be a bargain break for me because Teddy had still not found work so it was perfect. 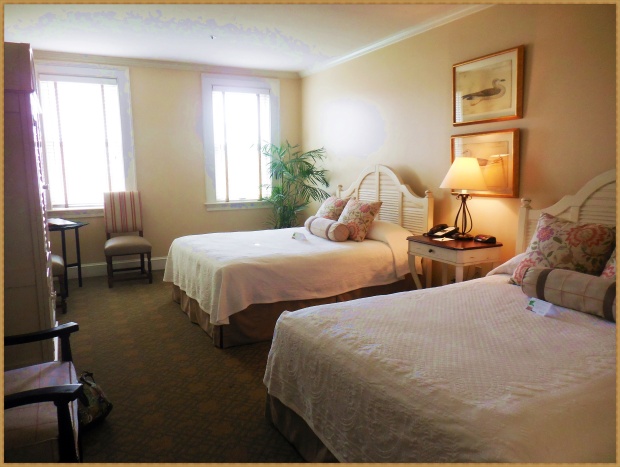 My beautiful spacious room at the Fulton Lane Inn

So, back to my date, I met her the first evening and she offered to take my photograph. She was a lovely lady who was waiting for her husband sail the boat up to Charleston from Miami. We had plenty in common so she asked me if I would like to meet up the following evening. I didn’t really want to, not because I didn’t like her, but I just wanted to be free without a timetable. Politeness, however, made me say yes. I organized my day around meeting her then and she dumped me.  My suspicion is that she looked at my blog and was put off by major depression or sexual fluidity!  On the second night, it was very busy with hotel guests and I felt awkward saving a seat for my date when there was a shortage. Eventually, I realized she wasn’t coming but that didn’t stop me talking to almost everybody. There were Americans, Germans and English people. I mentioned to one lady that my husband was adopted and she snuck away from her husband and mother to share a secret with me. A previously unknown son of her husband had turned up at their door. He wasn’t even aware of the son’s existence and hadn’t told her mother who was sitting at the next table. Isn’t it amazing what people share with strangers? Or is it just me?

There was a nice looking man sitting on the fountain so I just smiled at him instead. He was from Dallas, happily married and ‘bought’ me a glass of wine (you were obliged to tip the young server). We had a nice chat, he went to do some work emails and I went out to another river view rooftop bar for dinner. The first evening, I went to this lovely bar below at the Vendue Hotel.

The Rooftop Bar at
The Vendue Hotel

I loved looking one way at the water and the other at the historical spires – magical. The second rooftop bar was enclosed and less enjoyable but the food was good. I watched a Queen Bee of a medical practice hold court over all her male worker bees that had bow ties on – fascinating!

I really wanted to eat at this gorgeous restaurant but it looked like a Bunny and Teddy experience. The next time I will take him and stop predating innocent businessmen… 🙂