I just wish to send my personal greetings to all who serve and to all veterans here in the USA and in the United Kingdom.

The photograph above is of my dad; a Gordon Highlander who was captured at St Valery-en-Caux, France in 1940. He spend the remainder of the war years as a POW in Stalag IXG (Muhlhausen) Thuringia in the east of Germany until they were liberated by US troops in the very last days of the war. Dad passed at the grand age of 93 in August 2012. Below are the medals awarded to him that I keep with lots of other interesting memorabilia – stories for another day.

This a copy of a post by my husband on his LinkedIn page. I can add nothing more to this tribute than say that it brought a tear to my eye. May he rest in peace. 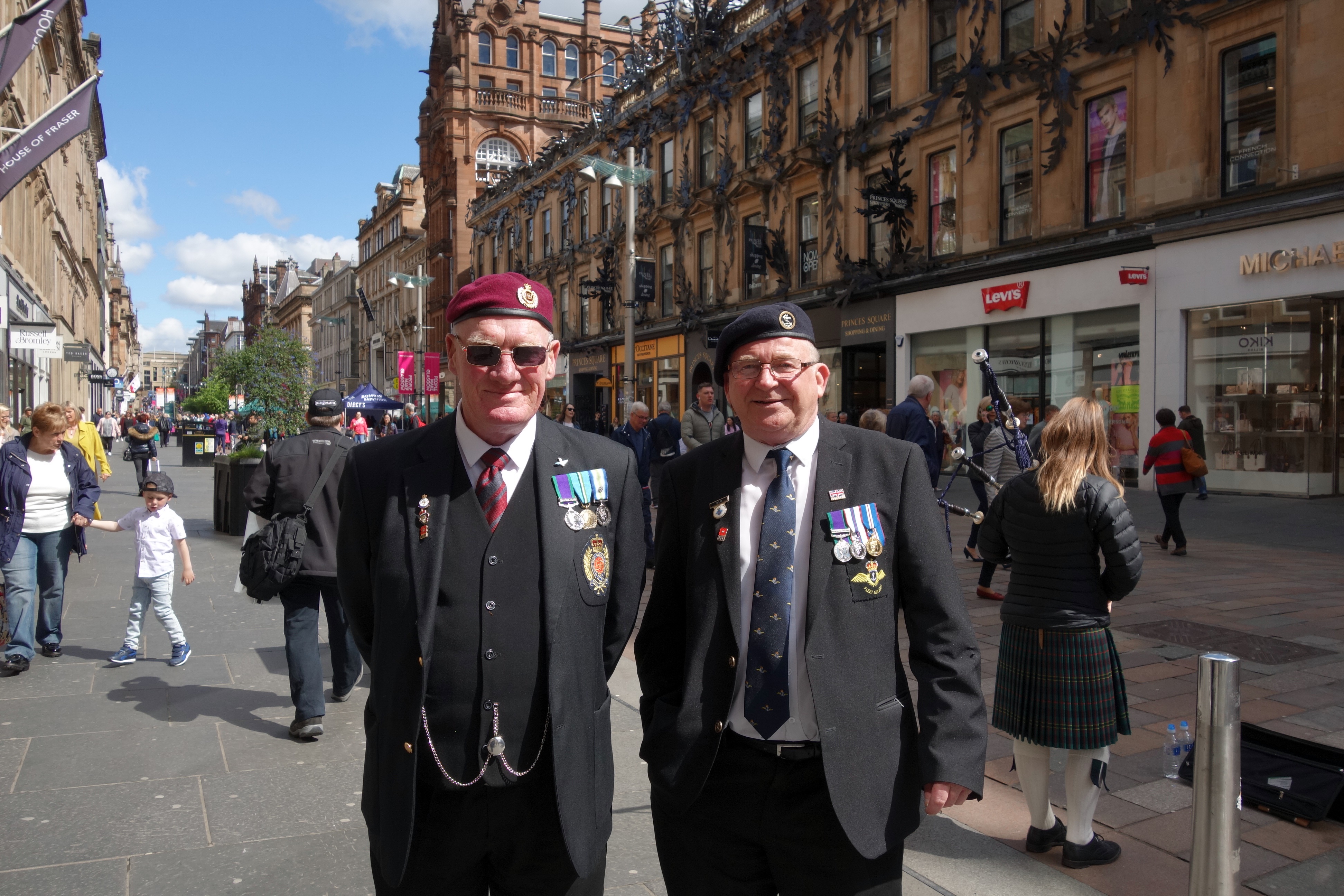 It is American Memorial Day on Monday 27th May to remember and honor those American servicemen who died while defending our country.  There are similar events all over the world.  In Britain we remember those fallen on the 11th day of the 11th month every year.

As an American I have so many ancestors who have fought and died for our country from the American Revolutionary War to the Civil War.  There may be others that I have yet to find.  As an American who was brought up in Scotland, I would like to pay tribute to four charming gentleman who I met on my sad trip to Scotland.

I mentioned the descriptive words disconnection, connection, familiarity and alienation in my last post.  So contradictory yet accurate.  As I walked towards my lunch date with school friends from yesteryear, I encountered various gentlemen in full military regalia.  I approached the first two and asked them if I could take their photograph.  They looked perplexed but pleased and I explained about my blog.

As I left the second group of servicemen, I thanked them for both their service and the photograph.  They looked at me as though I was a very friendly alien.  With my little blue passport and my transatlantic twang – that is exactly the right description.

Let us be thankful for all those who have given their lives in defense of their country.

I have been traveling immediately after the recent election so have been blissfully unaware of the fall out. I do feel fear because loose talk is dangerous in this volatile world. Diplomacy is so underrated and yet probably saves hundreds of thousands of lives. Sometimes on this day, I remember an ancestor who fought in wars. My great great grandfather was a Civil War medic on the Confederate side – I can only imagine how awful his job was. My father in law spent the whole war in a prisoner of war camp in eastern Germany.

This week we need to focus on the future and being optimistic. We were living in Cairo when the second Gulf War broke out. I had a lovely neighbor, an elderly Egyptian man who walked to the mosque in his pajamas every day. He always greeted me warmly in Arabic which I returned with a smile. A couple of days after the war broke out with dire warnings about weapons of mass destruction (‘loose talk’?) and Koranic music came blasting out of the old man’s house, directly across from ours. I was outraged that this nice old man could be mean to the westerners in the street – especially ME!

After a day of tears and indignation, I realized that the old man had died and this was normal for an Egyptian wake/funeral. Gosh, I felt bad and stupid, in my deplorable villa…🏡 I lit some candles in Tulsa, Oklahoma this week and one of them was for him and all the fallen. My father in law was a Pacifist despite his experience and never hated the German people. He probably even forgave his captors as he was a religious man.

Let’s hope and pray that our military are used for defense and not for an unnecessary war. Having said that, I wish that NATO would help Syria and Iraq. Those poor people did not deserve this. I received great kindness and respect in the Muslim world, from North Africa to the Middle East and the Far East. If I can live in a third world country in the middle of an unnecessary war, then I am sure that we can all move forward in the spirit of forgiveness and peace.☮🗽☪

This is Remembrance Day all over the world and I can’t write a better post than GP Cox so I have posted his. One little addition – I would like to thank the American and Canadian Red Cross for supplying such wonderful food packages to the Prisoner of War Camp that my Dad in law, Robert Duncan was imprisoned in (East Germany). These generous food packages fed everyone and was swapped for other necessities.

For each and every veteran – Thank You!!

World War I officially ended on June 28, 1919, with the signing of the Treaty of Versailles. The actual fighting between the Allies and Germany, however, had ended seven months earlier with the armistice, which went into effect on the eleventh hour of the eleventh day of the eleventh month in 1918. Armistice Day, as November 11 became known, officially became a holiday in the United States in 1926, and a national holiday 12 years later. On June 1, 1954, the name was changed to Veterans Day to honor all U.S. veterans.

A military parade with crowds of excited spectators along 5th Avenue, in celebration of Armistice day and peace in Europe following World War One, New York, 1918. (Photo by Paul Thompson/FPG/Getty Images)

In 1968, new legislation changed the national commemoration of Veterans Day to the fourth…

This is my lovely mum and dad in law on the night they became engaged, back in the 1940s. My dad in law was drafted into the World War II from Scotland, was captured almost immediately by the Germans and transported to a Prisoner of War camp in East Germany. As a prisoner he worked there for 5 years in a salt mine but was fortunate  return home alive. He had nightmares for many years and wouldn’t talk about his experience until later in life. Memorial Day allows us to remember all those brave men and women who fought for us. I recently found out that my great uncle Earl Dellinger was not a sad bachelor who lived with his parents but served as a Marine who fought in the Battle of Managua, Nicaragua in the early part of the 20th century. Then there was my great-great-grandfather who was a medic for the Confederate Army during the Civil War…. Can you imagine how awful that was?
Thank you, dear Ancestors.