As my Nana would say, “You can almost see her breakfast…” Thank goodness for skorts on windy days.

This is my second draft of a post because the first was a tirade about the Dystopian nightmare that I feel I am living in.  I keep looking up to the skies for a plague of locusts or frogs to accompany the Pandemic and violence.  Ultimately, I decided that there was no point in adding my angry comments and opinion to the melee.  Instead I retreated to my containment pond where the water is full of ducklings from both the Muscovy and Whistling Ducks.

I have been sitting on the edge of the culvert, frightening the green heron because I walk so softly and delighting in nature.  The dragonflies, of every hue, come close to me and land on my head.  Teddy has counted over 30 species of dragonfly in that pond alone.  We watched their very active mating and then saw a female dip her tail, with the fertilized eggs in the pond.  By August, it feels like you are in fairyland with a rainbow of dragonflies fluttering around you.  They stick close to humans to catch the mosquitoes that bite us. 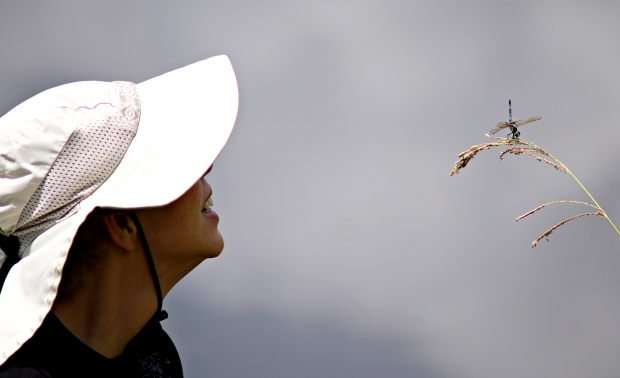 So far in 2020, Teddy has rescued a really large Turtle who was stranded upside down and yesterday I found a tiny little one, about 2 inches across, who was dropped by a predator in the grass.  I lifted him up and we were able to take a close look at his cute little face.  He was hot and bothered so I delicately popped him in the pond and off he swam having lost one of his nine lives (or whatever turtles have).  Today I stopped on the path as Mama Muscovy and her eight big babies walked up the bank and onto the grass for shade.  Mama kept on walking with a trail of ducklings waddling, with me at the tail end.  They have become used to my presence so know no fear.

The Whistling Ducks have tiny little spotted ducklings and they are a little more wary.  There are at least 8 pairs of ducks with a variety of little ones.  The ducks have a really cute squeak but I haven’t heard them whistling yet.  The frogs that bleat like sheep are back – and it is quite unnerving.  I keep looking for a flock of lambs to no avail.  There is a GIANT carcass of an Armadillo in the grass.  It is about the size of a large cat.  I guess it was run over and then the predators had some tasty lunch.

I mentioned before that Muscovy Ducks are called Backyard Ducks in Mexico where they originate.  That means they are a tasty lunch in Mexico…  While I was sitting at the pond I spotted an older Mexican couple who were gardening at one of the houses.  They were taking quite an interest in all the ducks and I watched them with trepidation.  ‘You can’t eat these ones – they have names!!’  I was overreacting because they just wanted to ooh and aah over the ducklings like all of us.  In Baja, Teddy and I had the most delicious duck and pomegranate tacos but I didn’t name those ones…  What a hypocrite I am, especially since I have eaten many interesting animals in our travels across the world.  Alligator is chewy, BTW, as is camel.

As much as I still enjoy my pond and its critters, I realize that I live in an idyll far removed from many Americans.  In our township, you are not allowed to discharge a weapon for any reason, especially not to hunt.  There are no fireworks allowed at any time and a million other regulations.  As frustrating as our quarantine has been, I can only imagine what it is like in crowded public housing with no job to go to. 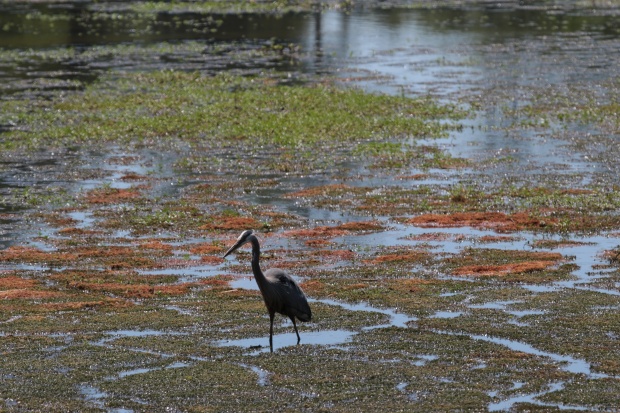 May we exit this pandemic in peace and live more equitably with compassion for every member of society.

All these photos are taken by the marvelously talented Teddy who has a new exhibit for his photography.

This is what happens when your utterly feral 14 year old Egyptian cat does not want to have her Fentanyl patch taken off. It had been a hard week for her – a very expensive operation ($1300), one tooth left, ingrown toenail, antibiotics for a sinus infection. She just went in to have her claws trimmed…

The patch had to stay on for 5 days and then be taken off a furry leg. The nurse wisely suggested I take her in but instead decided that she was so old now and had so few teeth it would be okay. We traumatized her but got the patch off and flushed away safely. She stayed under the bed for two days, backing away from evil mom, making mom cry and generally feeling miserable. She finally came out after endless organic chicken, tuna and treats.

She is really adorable but it’s still like living with three raccoons. Look at this precious wee face. 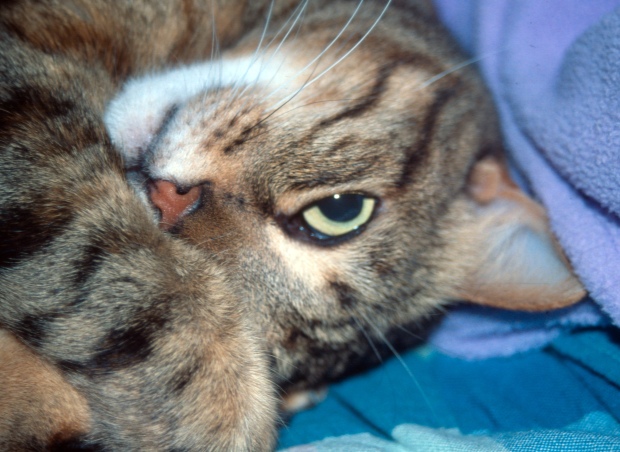 Okay, okay!! No more emails about violence in Waco, please. 🙂 For those of you who don’t watch the news, there was a biker shoot-out at Waco and 11 people were killed. Even the BBC news reported on it – http://www.bbc.com/news/world-us-canada-32783541 I was right outside that Twin Peaks bar and it was a perfectly nice, quiet shopping center with all the regular shops like Gap and Loft. Now we really know what the Texas Rangers do… These were rival biker gangs, fully immersed in organized crime and managed to just kill other gang members. The various law enforcement agencies knew that something was simmering and were on site to prevent innocent bystanders being killed. Poor old Waco – I suspect that they chose this area because it is the last place you would expect something to happen. I would still visit Waco in a second – it’s a lovely little city with some very strange visitors. When I read the BBC article it was like a scene from Breaking Bad – what!