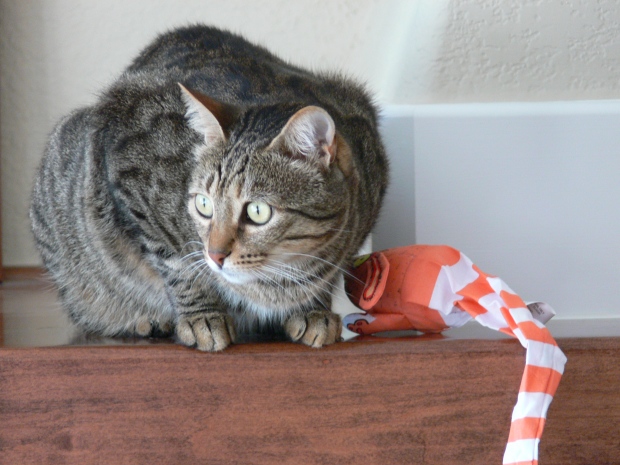 Aaawww – that cute little face. She doesn’t look like she has the capacity to reduce you to a whimpering wreck, does she? Not a day goes by when she doesn’t whine, beg, look at you as though you torture her and then cuddle me obsessively. It must be my fault but I don’t know how it happened.

Toffee, aka Toffee Tiddles or Baby girl, is our baby. She is going to be 13 this spring but is still our baby and behaves like it. We were introduced to Toffee when she was about 6 weeks old, so she has known us forever. At some point, before she was a year old, something traumatic happened to her. We have no idea what it was but it changed her personality. She was injured but was too upset for us to take her to the vet in Egypt. Our gardener found her and kept her in his room. We would like to think that she fell off the balcony but we think that a human did something bad to her, perhaps unintentionally. Most Egyptians love cats so it is hard to imagine that anyone deliberately did anything bad but they may have shooed her into the path of a car, perhaps.

I watched her mother, Mrs. Stripe, play with Toffee and her sibling Treacle (coal black), for hours in the garden. The play was really a lesson in how to hunt and it was usually mom’s tail. As they grew older, the siblings would play fight with each other but as feral kittens didn’t utter a sound. It was the weirdest experience to watch them hurt each other and squeak silently! Toffee was the dominant kitten and came into the house soonest. She loved to chase balls around the house and kick-started by putting her back legs up the wall. Those little paw marks on white-washed walls were so difficult to remove. Although her mum was not a hunter, more a scavenger, Toffee has a natural hunting ability and is literally addicted to lizards. They have some LSD type substance on their skin. Over the years I have rescued hundreds of lizards including a big black one that bit me!!

Her first proper toy was a handmade tartan teddy knitted by an American expat. It was a few inches long and she carried it everywhere. It was hard to get either toys or cat food in Egypt but we managed with ping-pong balls. Her absolute favorite was a toy that I bought for myself. This was another hand-knitted doll who was a genial witch, dressed in a purple outfit and a knitted broomstick. It was Halloween and I was just so delighted to find something so cute. Toffee took one look at it and ran off with Nanny Ogg in her mouth – it was as big as she was!

When we finally managed to get her to the vet for vaccinations and neutering, she was the worst patient ever – even worse than Zhenny… Our veterinarian had an assistant that looked like an Egyptian Lurch. His size and temperament calmed/scared most animals but not Toffee. She totally trashed Dr. Farouk’s office – she escaped from Lurch/Mohammed’s grasp, ran around like a mini tornado, breaking everything as she went. We finally found her inside one of his desk drawers. It was the only time I saw Dr. Farouk close to losing his cool. He wanted to know why we were looking after a wild animal but by that time, she was injured and we had no choice. She has rarely visited any vet in her 12⅔rd years and we hope she just drops dead someday. Apart from us adoring our little baby, she is has been a fabulous intermediary between Zhenny and Mrs. Stripe who both consider themselves alpha females. Toffee will play with them both, particularly Zhenny who she treats as a sibling.

She didn’t find her voice for years but now has a really loud, annoying squeak. I will put up with it for ages and then speak to her in Arabic. She puts her tail between her legs and then runs under the bed. Sigh. Then I have to go persuade her than Mummy is not an ogre (she should have met her Grandma) and please come out for some organic chicken. By now you should realize who the problem is… 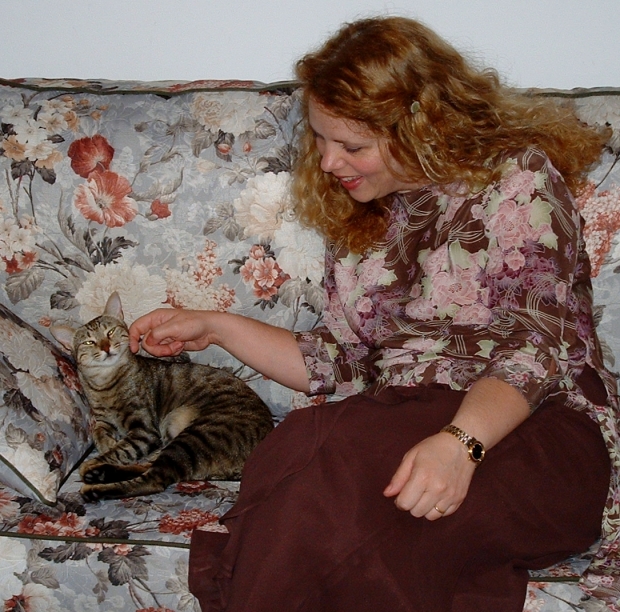 Toffee with Mummy in Egypt